THE EXPAT MIND: If you fall in love with someone from overseas and the relationship becomes serious, it may create a real dilemma about your future. Why and what should you do about it?

by Saff Mitten
in Expat Life 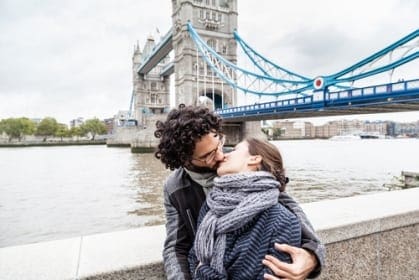 Many Aussies come over to the UK for a working holiday, primarily to travel and experience new things. Often the idea is to come for a year or possibly two, and then return to life back home. But what happens when you fall for a Londoner and you fall hard?

Dating and relationships can be a fun and important part of experiencing life in the UK. However, it can potentially pose a problem if you fall in love with a Londoner or someone from elsewhere in the world other than home. Why? Because longer term, if the relationship becomes serious it may create a real dilemma about the future.

If you start thinking this could be someone you could settle down with, where are you going to live? Do you love your boyfriend/girlfriend and London enough to give up everything you love and identify with back home and stay here permanently? Or are you expecting (or hoping) them to move across the world and start a new life with you in Oz?

Chances are it is something you may not even have thought about, but if you end up in this situation, it may not be straight forward…

For instance, I know a girl from Sydney in her early 30’s who started dating a Londoner but was clear from the outset that she intended to return home at some point to live. After they had been together for a couple of years she invited her boyfriend back to Australia for a holiday to meet her family and friends. They had a great holiday and he came back with a positive view of Oz.

She was of the view that because she had always been clear she intended to move back to Australia at some point, that he should have realised that meant he needed to be willing to live there too.

From this point on things seemed to become more serious between them and they began to discuss getting engaged. But then came the thorny topic of where to live if they got married. She was adamant that Sydney was her home and she wanted to return there to settle down and have a family. However, he was less sure about making such a big move.

Unfortunately, this caused considerable conflict between them. She was of the view that because she had always been clear she intended to move back to Australia at some point, that he should have realised that meant he needed to be willing to live there too. And after all, he had enjoyed it when he was there. He disagreed, pointing out that his family and friends were all here and because they had both been living here happily anyway, it made sense they just stay, rather than both having to start again back in Sydney.

Despite much discussion and soul searching, in the end neither of them was willing to give up their home town/country and all that it represented. It was too much of a sacrifice to make in the long term. As a result, they eventually came to the conclusion they had no choice but to break up, even though they loved each other and had planned on getting married and having children together.

Devastating stuff; and on some level they both felt that as a result of the outcome, they had wasted three years of their lives.

How did it come to this?

From a psychological perspective, one of the main issues was that they had both made assumptions about the future and where they would live, but had not communicated openly with one another until late into the relationship. As a result, neither knew what the other one was thinking or where they stood on this important issue.

He had assumed that if they got married they would go to Oz for holidays, but London would be their home.

When they first met one another she had said that she intended to move back to Sydney at some point, but she hadn’t mentioned this again and so he thought that maybe things were different now that they were in a relationship.

Also, he hadn’t realised that from her perspective the trip back to Australia was as much about him seeing what it was like to potentially live there, as it was to meet her family and friends. So perhaps not unsurprisingly, he had assumed that if they got married they would go to Oz for holidays, but London would be their home.

Therefore, when entering into a relationship with someone from the UK (or elsewhere other than Oz), if you know in your heart that Australia is where you want to live long term, it is worth keeping that in mind and sharing that with your partner when it feels right, preferably before things become too serious. And if you are unsure where you want to end up eventually, perhaps it is important to try and work that out for yourself, or to at least enter into a dialogue about it with your partner.

Clearly you don’t want to have these conversations too early into the relationship – as it is a bit premature and could scare them off – but if things start to develops further between you, it may be something worth considering and discussing before investing too much time and becoming seriously attached.

Of course, some Aussies do decide to make London their permanent home when they fall in love and they go on to create happy lives in the UK with their partners. While conversely, some people meet partners in the UK who are more than happy to emigrate to Australia and start a life with them there.

However, for us Aussies it is important not to underestimate the importance of home and belonging too.

The reality for many Aussies is that as much as they may enjoy living here for a few years or maybe more, they may never feel like London (or the UK) is, or could truly become home for them. Committing to stay somewhere that doesn’t feel like home may be too big of a commitment to make long term, even for love.

When facing this type of big life decision, in addition to talking to your partner about it before things progress too far, you may find that seeing a counsellor could also help.

Counselling can give you an opportunity to explore and examine your thoughts and feelings about this issue with someone who is not invested in the outcome – unlike your partner, friends and family who are all likely to have their own opinions. Additionally, it gives you the opportunity to be supported by a professional who can discuss the situation with you in depth, asking the right questions to enable you to consider all the angles and make an informed decision about what is right for you in your individual circumstances.

Also see by Saff: The psychology of living overseas: Is home not your home anymore?

Saff Mitten is an Australian counsellor, psychotherapist and life coach living and working in London. She has a great understanding of the range of practical and emotional issues Australians can face when living in the UK. If you want to contact her, please email [email protected] or call her on 07721872160. Also, if you want to find out more information about what Saff does, you can visit her website: www.saffmittentherapy.com