London’s Games will be “a very British affair, on a very global stage”

NICK CLEGG | One month to go, and London is calling...As the first city to host the Olympics three times, we’re looking forward to welcoming the world to London in the days and weeks ahead. 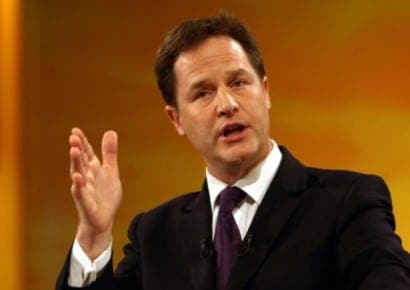 One month to go, and London is calling…

As the first city to host the Olympics three times, we’re looking forward to welcoming the world to London in the days and weeks ahead.

Every Games — from Sydney to Barcelona to Beijing — says something unique and distinctive about the country that hosts them. London will be no different.

From the Olympic Torch Relay, where British people from all walks of life touch a little bit of Olympic history, to the opening ceremonies (which remain top secret as I write this) to the Paralympics, which first began in a British town called Stoke Mandeville in 1948. This will be a very British affair on a very global stage.

First, it will show that Britain delivers. Our construction industry has pulled out all the stops to create an amazing Olympic Park, including a new Olympic Village just minutes away from the main sporting venues.

It was all built on time, within budget and to award-winning standards, including groundbreaking commitments to sustainability and green technology which have raised the bar for major construction projects in the UK and beyond.

Second, for those who haven’t been to the UK, I hope these Games will shine a light on Britain as an incredible place to visit.

The Olympic Torch, currently on its 8,000 mile journey across the UK, is showing off our attractions like never before: the amazing coastlines in the South West and the East of England, beautiful landscapes in Wales and Scotland, and a depth of history and heritage stretching from Stonehenge in the South to Hadrian’s Wall in the North.

We’ve also got the buzzing, metropolitan hotspots like Belfast, Edinburgh, Leeds, Newcastle, Manchester and Liverpool. Indeed, from the Beatles to Shakespeare, the UK has a cultural heritage like no other.

For many people, though, London is still the big draw. As one of the world’s great cities, it encapsulates everything we cherish in Britain: our multiculturalism and openness, our respect for our past, and our ambition for the future.

In London, you find a city of 200 different languages. You can eat cuisine from every Olympic nation. You see the pomp of the Houses of Parliament and Buckingham Palace sitting alongside the buzz of Soho and the bright lights of the West End.

This blend of old and new, the traditional and the cutting edge, will shine through our Games. Alongside the new Olympic Park, events will be staged in some of the most historic and iconic sporting venues in the country: Lords, the home of world cricket; Wimbledon, famed for its tennis; Greenwich, synonymous with maritime history.

London is, in every sense, a world within a city. It will be busy, yes, but also full of energy, excitement and potential: the perfect backdrop for the best in global sport and culture.

For any country, hosting a third Olympics is a huge honour. London has waited a long time for this moment and the whole world will be watching. In one month’s time, we hope to live up to those expectations — by putting on an amazing show and offering a glimpse of Britain at its best.

The A&E department tends to be one of the busiest parts of a hospital. People will come and go with...

Although in theory there is only one perfect poker game, in practice, both regular and recreational players come with a...

New Zealand is in an economic recession and the government is trying to spend its way through it with direct...

There's big money on the line with tonights draw, $5 million! Here are your Tattslotto results for Saturday, 21 November...

The state of Michigan, and the United States as a whole, may face a political crisis brought on by President...