London foxes are far from fantastic

GO HARD OR GO HOME: There is one skill that I did not expect to pick up when moving to London; the ability to survive a face-off with a fox. 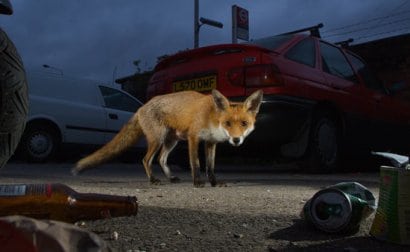 I HAVE added several strings to my bow since moving to London.

I’ve mastered the art of walking on icy roads, I’ve become a pro at drinking pints, and my knowledge of the Tube map has sky-rocketed from novice to expert.

But there is one skill that I did not expect to pick up; the ability to survive a face-off with a fox.

It may not seem like the biggest achievement, but I doubt any Aussie (Paul Hogan and the Irwins aside) can honestly say they were not scared when they encountered their first fox in suburban London.

I’d been living here just a few months when I had my first stand-off.

I was leaving my house early one morning when I found a fox standing proudly at my gate.

My heart began to race; at any moment that mangy, evil-looking feral animal would pounce and bite me on the calf. Or so I thought.

It didn’t move. For a good 15 seconds the dumb thing just stood there, glaring at me as though I was the one in his way.

I was running late for work. I didn’t have time for this.

So, with my eyes fixed on his, I cautiously opened the gate and walked out right in front of it.

Still, he did not twitch. Not even a blink (can foxes blink?!).

I walked briskly away, glancing back over my shoulder to check he wasn’t chasing after me.

Nope, he wasn’t. He was just wandering around, probably contemplating whose rubbish bin to make a mess of next.

Which brings me to my next point: rubbish.

Another thing I’ve learnt about suburban foxes is that they love rubbish.

Stepping out of my house to find my garbage bin has been torn open by a fox and my food scraps have been scattered all over the path is not ideal.

And while I’m on the topic of street foxes – that horrible screeching noise you hear on a winter’s night is not actually a young girl being abused, it’s a fox having a randy old time with a mate.

Yep, that noise which sounds like someone is being attacked is actually two feral animals making baby foxes.

Until then, I’d advise you to keep your distance when you’re faced with one, put your rubbish out at the last possible minute and don’t call the police when you hear them mating.