HONEYMOONING NOMAD | You heard it here first; the best things in life are free. Our honeymooning nomad hunts down the top ten things to do in London on a budget. 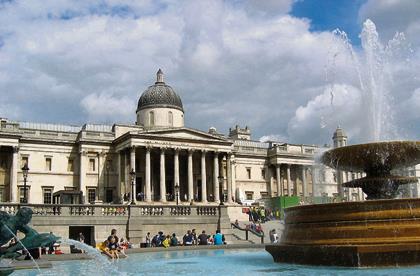 A RECENT TripAdvisor survey ranked London as leaving much to be desired when it came to “Value for Money” — coming 35th on the list of 40. However, as a new resident of London and a confessed Anglophile, I feel it is my duty to show the city I have come to know and love — affordable London.

No matter how long you are in London, there are a multitude of things to do that are budget-friendly and fun. To help narrow the list, I’m going to give you my favourite things to do — all for free.

Located near Holborn, this museum was opened in 1753 and houses more than seven million objects, including treasures such as The Rosetta Stone, the Assyrian lion-hunt reliefs, the Parthenon Sculptures, the Black Obelisk and the Portland Vase. To fit everything in, check out the free walking tour at 2pm every Saturday afternoon by London Walks.

Surprisingly, London is one of the greenest capitals in the world, featuring parks that are perfect for sunbathing and picnics in the summer, and refreshing walks or a game of football in the winter.  Some of the major parks include Hyde Park, Green Park, St James’s Park, Greenwich Park (with fantastic museums), Hampstead Heath, Regent’s Park (also home of London Zoo), Clapham Common, and Richmond Park (home to hundreds of deer).

There are also a number of stunning public gardens that house a variety of plants, bridges and outdoor galleries. If botany is your thing, check out the magnificent World Heritage Site covering 300 acres that is Kew Gardens, the recently resorted Chiswick House and Gardens, the oasis of Isabella Plantation, the rock gardens in Chelsea Physic Garden, and the landscaped parks of Syon House and Park.

3. Tower of London Ceremony of the Keys

The Ceremony of the Keys at 9.30pm is the traditional locking up of the Tower of London and has taken place every single night, without fail, for the last 700 years.  While the Monarch no longer resides here, the Crown Jewels and many other valuables still do.  Tickets are free, but you are required to write to the Ceremony of the Keys Office (Tower of London, London EC3N 4AB) with a return envelope and request two possible dates you can attend at least two months in advance.

Situated on the north side of Trafalgar Square, this gallery houses an amazing collection of Western European paintings in the world from about 1300 onwards. There are works from Botticelli, Titian, Raphael, Michelangelo, Caravaggio, Rembrandt, Cezanne, Hogarth, and Gainsborough. The National Gallery is open late on Fridays until 9pm so you can explore the paintings, see an exhibition or take a guided tour with fewer crowds. There is also live music, a bar and food at the National Café.

5. Changing of the Guard

This takes place at 11.30am daily from April to July, and on alternate days from August to April (unless planned events change the schedule). The nearest Tube stations are Victoria, Green Park and St James. The activity starts at 10.45am, but some people arrive as early as 9.30am to get a good position.

London has an array of various markets that are free to visit and full of life and colour. My favourite are:

This museum in East London offers a vivid physical history of the English interior in a set of 18th century almshouses. You can observe the domestic history in a display of original furniture, paintings, textiles and decorative arts from the 1600s.

8. Check out a City Farm

For all things cute and adorable, check out one of London’s city farms that are scattered throughout the capital. Mudchute Park & Farm is one of the largest city farms, spanning 32 acres in the middle of the Isle of Dogs in East London.

Each farm hosts a multitude of traditional farm animals (pigs, horses, goats and chickens) and some specialise in rare breeds and more unusual inhabitants such as alpacas and chipmunks.  Most of the farms offer volunteering opportunities and also sell much of their own produce including free range eggs, seasonal vegetables and herbs, and even honey at Freightliners City Farm.

The Victoria and Albert Museum is one of the three major museums in South Kensington. It holds the most comprehensive collection of British design and art from 1500 to 1900, as well as artefacts from many of the world’s richest cultures. On the last Friday of every month the V&A hosts Friday Late, which includes live performances, one-off displays and installations, debates, bar and food, guest DJs and late-night exhibition openings.

The famous tower of Westminster Parliament, popularly known as Big Ben, is actually called the Elizabeth Tower. Big Ben is the nickname of the bell housed within the Tower, and is officially known as the Great Bell. A free tour is open to UK permanent residents only and must be arranged through a local MP or Member of the House of Lords. The tour takes you up the 334 stone spiral steps to the top of the 153 year old Elizabeth Tower to hear Big Ben strike the hour.

Now you’ve ticked numbers 1 to 10 off the list, next week read 11 to 20 of top free London activities for more inspiration.

What’s in your top ten free London activities? Give us your suggestions below: