It’s easy for an Aussie expat to pick up a London accent, innit

But don't just think the expat affliction of acquiring an English accent is necessarily about contracting posh, clipped tones and a habit of saying yo-gurt, instead of yogurt.

If there is one thing I really hate, it is a person who is being inauthentic. I despise people that do certain things or act a particular way because they think it is the ‘cool’ and ‘hip’ thing to do. Just the fact that I used the word ‘hip’ in the previous sentence proves just how uncool and proud of it that I actually am.

That is why I found myself in a predicament. You see, I have always had a tendency to pick up accents really easily. It isn’t an affected thing that I do on purpose to sound posh… Quite the opposite, as my time in London went on I could hear myself speaking more and more like a Cockney. What started as saying “innit?” and adding “yeah?” to the end of every sentence became a full-blown problem. 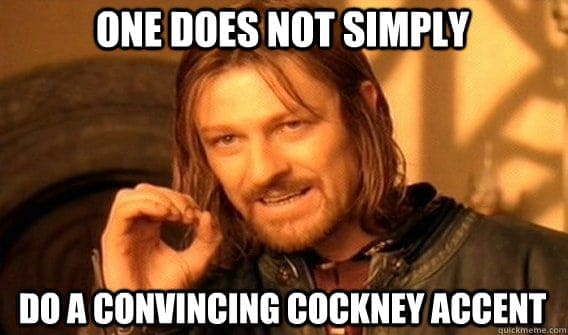 Going back even further, my Year 7 report card gives a glowing review of my performance, but makes a point of noting that I had a habit of mimicking other people without realising it.

It got worse when I lived in the USA as a teenager, where I was forced to adopt a pseudo-southern drawl every time I had to speak on the phone or order drive-through so that they would understand what I was saying.

Fast forward again to Blighty. Many Australians I knew at the time didn’t quite understand it. I got the feeling that they thought I was doing it on purpose, in some type of vain attempt to abandon my heritage and fully assimilate with my new London neighbours. I tried to put on my best Australian accent and insisted it wasn’t the case… but even as I tried to deny it, I could feel the urge to someone “ hey babes” or “hey bruv”.

It became blatantly obvious that my little problem had gotten way out of hand on an occasion when after an hour speaking to a local Londoner he asked me where I was from. I told him proudly that I was from Queensland, in sunny Australia. He was taken aback, saying that he had meant what estate had I grown up on rather than what country.