BRON IN THE DON | For our resident London adventurer, going to the movies is one of her all-time favourite activities. That’s why, when offered the chance to tick #18 of her London Top 100 list and visit the BFI on the Southbank, she jumped at the chance and busted out the popcorn. 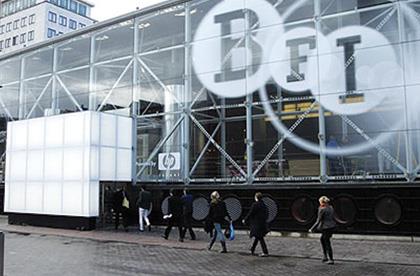 I’M so constantly busy with London life that I rarely get to the movies here — unlike when I was at home and would see a movie pretty regularly. London movies somehow allude me, even the big blockbusters that I keep meaning to see. Therefore when I saw the chance to tick off #18 on my London Top 100 list and re-indulge by cinematic fancies at the British Film Institute (BFI), I was very excited to give it a go (not to mention reacquaint myself with my long lost weekend treats of popcorn and frozen cokes).

The film institute and its partner the BFI Imax are both located in one of my favourite parts of the city — Southbank. A short walk from Waterloo (you can literally see the Imax from the Station) Southbank is the perfect place to go out for a drink or meal before or after your movie.

The BFI hosts a variety of film genres and often has different seasons of film. Currently they are hosting ‘The Genius of Hitchcock’ which showcases the famous directors’ work from August to October. They also have several other features for those who are interested in alternative cinema. One that I want to check out when I get the chance is another current feature — the sight and sound Greatest Films of All Time Poll that is held once a decade.

Rather than visiting one of the institutes’ current features, I chose instead for something a bit more main stream and went to finally see one of the newest blockbusters. I went to see one of the many new action flicks — Spiderman. What better way to see the special effects, fight scenes and a fit bloke in spandex then watching it in Imax and in 3D. While the ticket prices are a bit higher than most movie cinemas — about £17 a pop — it is worth it if you enjoy the cinema experience.

The Imax is the size of five double decker buses but even so it was an unexpected surprise when I was asked to take an elevator up to my seat! The theatre itself was packed with movie goers and we all got to wear those super trendy 3D glasses as we watched Spidey fly around the screen and come out towards you in your seat.

I was happy to have my popcorn and frozen coke and spend a Saturday afternoon relaxing while taking in a movie however I think that I much prefer the rest of my London adventures as they are much more unique to the city itself.