THE EXPAT FACTOR | Kelly Lovelady is the founding Artistic Director and Principal Conductor of London’s all-Australian chamber orchestra, Ruthless Jabiru. With an incredible passion for music Kelly has an ambitious creative vision for the orchestra which is on the verge of being realised. The upcoming concert at Australia House marks an exciting moment for Kelly, the Australian members of the orchestra, and the Aussie expat community in the UK who have the opportunity to witness and support what will be a world-class performance. 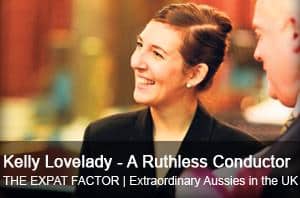 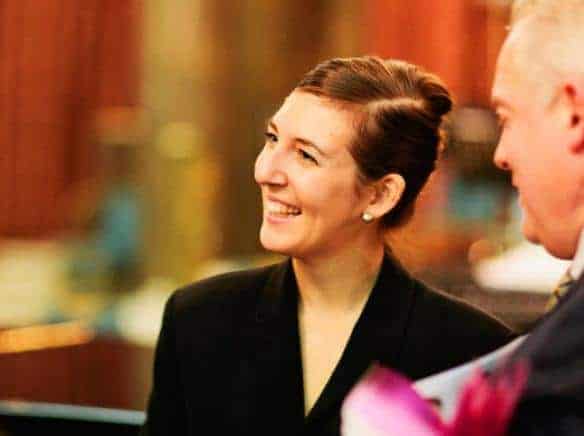 My stint in the UK began in 2007. I was being forced out of Canada for the second time for visa reasons, having lived between Montreal and Winnipeg for almost 5 years studying conducting. It was all very unexpected, I’d really begun to think Canada was a place I could build my musical career, and I just wasn’t mentally prepared to leave. It was devastating, I was a mess.

I had to think fast, so I decided on a whim to go to Edinburgh. I’d recently had some great fringe theatre experiences in Adelaide, so I decided to seek out what I knew best, and at that stage it was fringe. I’d never been to Edinburgh, and didn’t know a single person living there. I rang everyone I knew with Scottish connections, and managed to pull together a handful of second degree contacts. I went knocking on all their doors and those people became the core of my Edinburgh network. I saw every show I could get into, and spent every waking moment with artists, musicians, producers, crew, critics, promoters; backstage, front of house, speakeasys, after parties, the list goes on. It was a transitional time for me, but Edinburgh really taught me a lot about self-producing, and about the things I value most in live performance: spark and originality.

I’d lined up a series of productions that year in Montreal, where I’d expected to be living, so I was back and forth a lot on the budget airlines. Without notice, my roommates and I were told we needed to vacate our Edinburgh flat. I was about to mount a chamber opera in Montreal, so I ended up boarding that plane with everything I owned. I was conducting and self-producing a piece called Miss Donnithorne’s Maggot by Peter Maxwell Davies: it’s a Miss Haversham story about an Australian woman whose isolation spirals her into madness. In retrospect, it could have been ominous.

After the opera, I somehow ended up flailing my way around France, Spain, Germany. It was such a whirlwind, I was literally waiting for a sign to point me in the right direction. A friend in London wrote me a quick email to say hi. I got on a plane to London that afternoon, and haven’t left.

I’m not one for keeping tallies, so I’m not really clocking the time I’ve been here. For the first few years I was in denial: I’d never thought London would be the place for me. The progress to living here permanently has been gradual, but I find myself focussing more and more on long term projects, so I think that’s an indicator if ever there was one.

The most central of those projects is an all-Australian chamber orchestra which I’ve started here in London called Ruthless Jabiru. As a recent startup, there’s a lot of fluidity in the developmental stages as we figure out how to achieve the efficiency we need in our uniqueness, but this ensemble really feels like something that has a future.

I love working with Australians. The shield is down, everything’s out on the table. I also love working with composers. It makes sense for this orchestra to include Australian music in its concerts, and it will never cease to amaze me how intuitively Australian musicians approach the music of our co-patriots. I find it really moving to have the chance to conduct the music of living composers, and when those composers write music which feels so innately Australian, it can really be heart-wrenching.

The concept of Ruthless Jabiru is that the Australian musicians working professionally in the UK’s major orchestras can come together to play. The defining challenge is scheduling. How do you put on a concert when you’re up against all the orchestras with which these players are regularly performing? Luckily I have an ever-growing database of Aussie musicians keen to join the project, so our membership is flexible to accommodate this on an event-to-event basis.

I’m doing everything in my power to go after my creative vision for the orchestra. There’s been an extraordinary amount of interest in collaborations for the year ahead, and our activity is going to skyrocket from here on in. I hope that Ruthless Jabiru’s future will include festival appearances, independent concerts, gala events, and a subscription series. Commissioning living composers is going to be a major part of our ethos, which will lead into audiovisual documentation of those new compositions. There’s so much potential, but I’m keeping a lot of ideas on the burner as we collate the stats of our audience. I don’t want to alienate anyone in these early stages.

There have definitely been advantages to pursuing my career here in London. For one thing, I’m not sure Ruthless Jabiru could happen anywhere else quite the way it’s playing out here. I’ve had the opportunity to do a lot of casual venue work in the city since I arrived. I’ve been a fly on the wall in so many of London’s major arts centres and organisations, and through being in the right place at the right time, I’ve met most of my musical mentors. I’ve seen world class performance every day of the week, and sat through what I’m sure adds up to hundreds of hours of rehearsal and studio sessions. My level of industry exposure simply wouldn’t have been possible in a city with a lesser turnover of visiting artists and inspired programming.

I run Ruthless Jabiru out of my canal boat, which I bought three years ago. Living on the waterways has been a complete lifestyle change, but I love having an autonomous workspace and the independence that comes with that. I usually moor up in a different part of London every two weeks or so, which means I can immerse myself in vastly different communities and conditions on a regular basis. I’ve noticed so many successful Australians talk of the benefits of our class mobility here in the UK. I have the luxury of marking out that mobility in a very literal sense: from Little Venice, to King’s Cross, to Hackney Wick, and all the mooring rings in between.

Ruthless Jabiru will perform at Australia House on 9 May. The concert will comprise works by Australian and American composers, Brett Dean Carlo, John Adams Shaker Loops, and the world premiere of the orchestra’s first commission by Australian composer and producer Leah Kardos. Tickets are £30. RSVP to [email protected]

See: All Australian chamber orchestra to perform at Australia House