Keep left (or face the penalty!)

LOST IN LONDON | For those of you that know me, you’ll know that sometimes the mere act of standing upright is a challenge, let alone propelling forward in a horizontal motion (otherwise known as walking). And that’s when there is a clear path ahead of me, and the occasional lamppost to right myself against (that is, when I don’t walk straight into it). 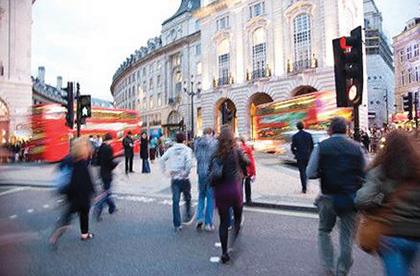 FOR those of you that know me, you’ll know that sometimes the mere act of standing upright is a challenge, let alone propelling forward in a horizontal motion (otherwise known as walking). And that’s when there is a clear path ahead of me, and the occasional lamppost to right myself against (that is, when I don’t walk straight into it).

Therefore, when I considered starting to walk to work I already knew it would be an achievement just to turn up to work without scabby knees and gravel rash on my face. And this is before I realised that Boris Johnson is possibly using the main thoroughfares of London as his own personal version of the “Hunger Games”. It’s a hunt to the death, except there’s eight million players and I don’t have kickass hair. Or the ability to shoot an arrow through the eye of the cyclist who tried to run me down through a red light screaming “get out of my f*@#ing way, wankers”.

In an otherwise law-abiding, protocol-following society, it is like the sidewalk in London is the last medium for the expression of everyone’s otherwise repressed internal anarchist. An opportunity for the buttoned suit bloke or high society lady to throw off the decorum of walking in a straight line down one side of the footpath and run wild with abandoned glee, zigzagging and sidestepping, slowing down and speeding up, turning left, then back, then stopping suddenly. All whilst laughing manically at the chaos left in their wake. I often feel like standing in the middle of the footpath – Jess from New Girl style – and yelling “these traffic-flows are extremely counter-productive”.

There’s another thing I’ve learnt being over here in Blighty. They may follow the rules to the letter everywhere else in life, but waiting until the green man tells you it’s safe to cross — that’s where the English truly love to stick it to the proverbial man. “What’s that flashing little red man? You don’t want me to cross because there’s a semi-trailer bearing down on me from around that blind corner? Well, you can just stick it up your little red who-ha cause I’m crossing without looking, bitch.”

Add to this irate bus drivers with 10 tonnes of red metal in their control and pre-pubescent’s on fixies with a scant disregard for anyone who can’t ride a bike with one hand whilst yelling “I’ll totes be there in five clicks bro” into their mobile phone and it’s a wonder I am still alive. Or at least still upright, and not wrapped around a post with tyre marks across my face.

All that’s missing is the killer bees. But knowing Boris, they’re not far off…