GO HARD OR GO HOME: There's a well-known joke that Londoners love to queue. But forming an orderly line is so central to life in this part of the world, it's no laughing matter. 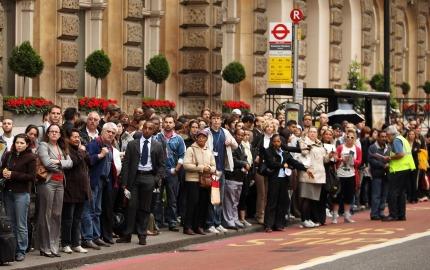 THERE’S a well-known joke that Londoners love to queue.

But after paying more attention to the art of lining up and my own behaviour, I’ve discovered that it’s no laughing matter.

Forming an orderly line is so central to life in this part of the world that the art of queuing was reportedly going to form part of the citizenship test for immigrants.

The seriousness of the concept became even clearer at Wimbledon, when staff handed me a ‘how to queue’ guide. No joke.

Living in London has seen my queuing experience grow from nightclub-specific situations to everyday activities, such as crossing the road.

While I don’t particularly enjoy it, I find myself standing in an orderly line several times a day.

I did some maths and found that it’s not unusual for my daily queuing time to exceed one hour.

On a bad day, the commute to work alone can involve 20 minutes of lining up.

Within five minutes of leaving my house, I join my first queue for the day — at the traffic lights.

Clapham’s intersections are busy at 7.53am on weekdays, so there are plenty of people waiting for the man to go green. I stand behind them for a minute, sometimes more.

Four minutes down the road is an even busier intersection, and the same situation arises. Add another minute or two to my tally.

Three more minutes of walking and I am at Clapham Junction station, where the queuing gets serious.

I line up at the gates to enter the station — this queue only takes a few seconds, but it all adds up.

Some days, the Oyster card reader adds a few more minutes to my queuing time by telling me to ‘seek assistance’ (which translates to ‘your card’s outta dough’).

Once through the gates I’ll spend anywhere between two and 10 minutes on the platform, standing behind about a dozen other commuters.

Next stop: Waterloo. I repeat the same routine; line up at the gate, and again on the Tube platform, waiting for the Waterloo and City line.

Soon I arrive at Bank station. The queuing begins from the moment I step off the train, and it continues at the gate, up the escalator and right up to the point where I shuffle up the stairs and out of exit number two.

I am at my last train stop, but the morning’s queuing excitement is far from over — there are more traffic lights to contend with on the 10-minute walk to my office.

Heaven forbid should I want to stop and grab a coffee on my way — this adds about four queuing minutes.

So, after all that, I’ve reached my office. The queuing tally remains stable at just under 30 minutes, until lunchtime rocks around.

Off to the shop I go — but first, I’ll need to withdraw some cash. Add two minutes.

Pret, M&S or some other in-your-face chain is my next stop where another three-odd minutes lands on my waiting time total.

And if I want another coffee, a good one this time, I’ll have to wait about six minutes at Taylor St Baristas near Liverpool Station, along with every other Antipodean who works in the decent-coffee-deprived area.

Lunch is over and my queuing minutes rest at 41 for the rest of the afternoon.

Depending on my plans for the evening, this can easily double.

The journey home is less queue-heavy (about 15 minutes is standard), but if I’m going out for dinner, that will easily add 10 minutes.

If we want a couple of beers at a pub afterwards, another 10 creep on.

Should my evening involve a gig, between the queue to get in, the bar and the toilets, that’ll steal another 10 minutes of my time, at least.

So, after highlighting all the time I spend queuing in this city, it doesn’t seem such a stupid idea to teach foreigners how to do it correctly.

Because, as former immigration minister Phil Woolas reportedly said back in February, “Huge resentment is caused when people push in”, and we wouldn’t want that now, would we.