Jennifer Guerrini-Maraldi is an Australian art dealer specialising in contemporary abstract act from indigenous outback communities and owner of JGM Art Gallery in Battersea. She is a member of the Indigenous Art Code, an Australian Government initiative to ensure fair trade and ethical treatment of Aboriginal artists. 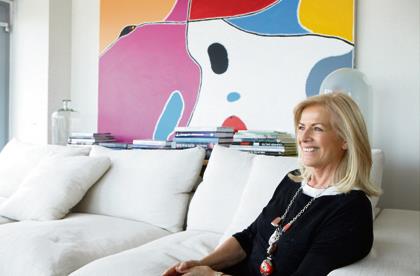 Jennifer Guerrini-Maraldi is an Australian art-dealer specialising in contemporary abstract art from indigenous outback communities. A Melbourne native, she became director of the Powell Street Gallery at 23 and moved to the UK in 1978 enjoying various careers before a Freddie Timms painting drew her back to the art world.  Sugar Bag sits proudly in the open-plan kitchen of her large Battersea apartment which doubles as a gallery.  This sanctuary is her “little piece of Australia” with its river views and natural light from its large windows illuminating the artworks.  More of her collection is on display at Talisman antique dealers in Fulham and Belgravia.

I moved to London during the Winter of Discontent of 1978 with snow everywhere and garbage piled 20 feet high in the West End.   I’d never seen such a calamity.  Then Margaret Thatcher was voted in — like a sort of fairy princess, waving a wand.  She was so self-assured and her convictions where so strong.  I followed her closely, not for her politics, but because I was so mesmerized by a woman in a man’s world.  She was a trooper who worked so hard and cared about people, telling them to go home and rest if they looked tired.  She worked harder than the men, but they didn’t dare go home before her.  With the cause I’m fighting, for the acceptance of indigenous art, I have a sort of synergy with Margaret Thatcher’s fighting spirit.

Moving to London, I wanted to continue as an art dealer but I didn’t have enough money and it took half a lifetime here to build up my networks.  So I did all sorts – property developing, writing about fashion and travel for County Life for 15 years, and I was a VIP dresser for Browns, which became a networking process.  Now I’m able to operate on a very broad canvas.  The UK market for indigenous art is growing and I’ve clients in Zurich, Paris, Geneva, Rome and St. Moritz. Once people are turned on to it, they come back for more.  It’s almost addictive once you get it.

Dealing in art is a calling — it’s in my DNA.  I love finding a home for something beautiful and knowing people get such enjoyment from the art is hugely rewarding.  The first indigenous painting I bought, Sugar Bag by Freddie Timms, was like a thunderbolt.  It was like being grabbed by him and told this is what you will do.  So much art today in the price bracket I deal in, from £500 to £40,000, is merely decoration – wallpaper in a frame — and it doesn’t offer that emotional response.  In contrast, the indigenous paintings have a kind of spirituality that’s very uplifting.

It’s profound to live with the paintings and I grieve after a sale.  I had a wonderful yellow and black Fred Ward painting in my office — a maze that showed the story of the honey ant dreaming. How does Fred Ward know where the honey ant travels?  Because it’s a food source and the Aborigines have an affiliation with everything natural — the night sky, the tides, the caves, the clouds — everything becomes sacred and all becomes the dreaming.  The painting ended up displayed proudly in a wonderful enormous loft in Wapping.

I only deal with registered art centres so I can meet the artists, watch them working and talk to them.  I go back to Australia once or twice a year, usually in August.  I start at the Darwin Art Fair and the Telstra Awards at the Art Gallery of Northern Territory, which becomes a hub for people from all over Australia.  Then I’ll go round the APY Lands on the border of Northern Territory and South Australia, where there are some beautiful painters at the moment.  I want to get their work known and accepted as beautiful art, not necessarily as Aboriginal art.  I use the term contemporary Australian art as I don’t want to pigeonhole it.

Whenever there’s money involved in an explosive industry, there will be underground dealing.  There’s a strong lobby to make the Indigenous Art Code mandatory.  The Aboriginal people may have problems, but they’re not stupid.  If desperate, they may accept money or a car from carpetbaggers, but then deliberately paint substandard work.  Anyone with a good eye for quality will recognise this.  No reputable auction house will touch art without proper provenance and so you can forget resale.

On the weekends, I go to the Colbert café in Sloane Square to watch the world go by.  I like the Wolseley in Piccadilly and the Petersham Nurseries in Richmond.  I would recommend Eight over Eight, an Asian fusion restaurant on the King’s Road, which is owned by Australian, Will Ricker.  I love going to the Columbia Road flower market or Covent Garden to buy plants.  Being in Italy is also one of my hobbies as my husband Filippo is Italian and we have an apartment in Rome.  We met in London and he also works in the art world (as an insurer).  He loves art, skiing and tennis like me.  We often eat Italian and I love making risotto, making up my own combinations. I speak Italian badly, but I understand everything. My husband is always correcting me.

I love the wilderness — deer-stalking in Scotland is almost like the outback in the UK for me.  It’s pretty intrepid as we walk for eight or nine hours and climb the highest peaks.  I love being up in the moors looking down on the lochs as it’s a similar feeling to the wilderness in Australia.

Jennifer Guerrini-Maraldi will show at the Masterpiece Art Fair at the Royal Hospital Chelsea from 27 June to 3 July in a pop-up barn of recycled timber to complement the natural artworks. For more information see Jgmart.co.uk.