LOST IN LONDON | A.A Gill once said about London weather: ‘it’s been incontinent for weeks.’ A statement that has never been more true than about this particular English summer. 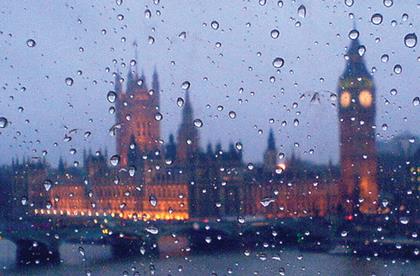 A.A Gill once said about London weather: ‘it’s been incontinent for weeks.’  A statement that has never been more true than about this particular English summer. But be warned, this is not just incontinent in the sense that you’ve laughed way too hard and a little bit of wee came out. This is like London has developed the constitution of a 93 year old with a colonoscopy bag.

Every time I look out the window, it’s raining. Everytime I check the iPhone weather app it’s got those little droplets of doom symbol for the next seven days (and the same temperature as Sydney’s winter…). And every time I step out the door without my umbrella… it’s clear and dry. But then in the 4 minutes and 56 seconds from that moment (the maximum time one can travel from their home before deciding it’s not worth going back from whatever one has left behind), it will be a sudden situation of maximum leakage, minimum coverage.

As for right now, you guessed it, it’s raining.

Therefore, when the sun does make an appearance – an occurrence that’s about as rare as Gina Reinhardt at a meeting of the Socialist Alliance – it’s no wonder that the population of London seem to suffer a mild form of sunstroke-induced psychosis as soon as those vitamin D rays hit their skins.

It’s like butterflies emerging from chrysalis. Like a newborn foal taking its first steps. Or, after a particularly long spell of all-encompassing fog, like the Darkseekers from I Am Legend emerging to feast their mutant fangs on anyone displaying a slight tan. Crawling out from cracks in the building, surfacing from the cavernous Underground, disgorging out from the darkened drinking holes – inhabitants lumber and lope towards the patches of golden light shining down on parts of the pavement, and squares of grass, and here they will gather and squint, looking up in wonder at this mysterious shining ball in the sky.

Because let’s face it, with the limited time it’s up there, you have to make the most of it. The parks, in particular, are like Mount Sinai to its Chosen People. A place where, when the sun shines, you can rent deck chairs and lounge by the lakes, ride bikes round winding paths, read the paper on park benches and generally roll around in the grass like a happy farm animal murmuring ‘sunshine, my preciousssss…….’ Just make sure you take off as many clothes as possible while doing it because apparently, when the sun comes out in London, being half naked in public becomes a pre-requisite. Walking though the park, the pub or even the street is like walking onto the set of a very low budget, poorly cast, porn movie about lazy strippers who just want to spend their time sunbaking.

Basically, the only place you really don’t want to be when the sun is shining is the Tube. An encased metal tub with no air-conditioning quickly becomes some modern demonic version of a Native American sweat lodge that smells like all of London’s recently discarded incontinence diapers. It’s all you can do to keep standing upright, and try not to let your inner thigh sweat drip on your neighbours Armani briefcase. And I say neighbour, when really I could mean lover, because it’s peak hour and your boobs are pressed up against his elbow and his hand is inexplicably on your ass.

But to be fair, he may just be looking for a surface to leverage on so once the doors open he can push off and scurry more quickly out into the sunshine with the others…