BRON IN THE DON | Feeling sick? Usually you’d make a doctor’s appointment. However, as our resident adventurer discovers, there may just be an alternative if you’re the self-diagnosis type - #96 on the Timeout London Top 100, the Wellcome Collection. 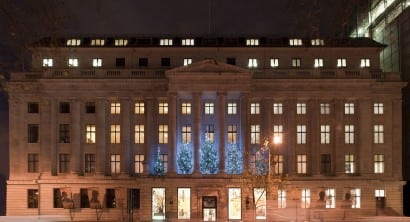 THE Wellcome (not a misprint) Collection, number 96 on the Top 100, is advertised as ‘a free destination for the incurably curious’. As someone who has been diagnosed with a serious case of curiosity, a visit to this place was just what my doctor prescribed.

Tucked next to the Wellcome Trust on Euston Road, the Wellcome Collection is a museum which explores the connections between medicine, life and art in the past, present and future.

On the ground floor there is a space for temporary scientific or medical themed exhibitions. Last year they displayed an exhibit called Superhuman, which showcased all forms of human body enhancement, from prosthetics to lipstick.

Up until recently, the space was occupied by the aptly titled ‘Death: A portrait’. If the idea of an open casket freaks you out, don’t worry, this exhibit is not what you expect. Rather than portraits of corpses, it is more an exploration of how different cultures deal with death.

As I wandered into the morgue… I mean, the exhibit… I was happily surprised to see beautiful paintings and sculptures, historical artefacts including skulls, and scientific specimens.

The highlight was a massive info graphic that showed the fatality rates of various causes of death and how they are linked. It surprised me that certain types of cancer were less deadly than things like heart disease.

At the end of the exhibit was a spiral staircase with the sign Medicine Man. It was time to peek into the life of Sir Henry Wellcome, who the museum is named after. Sir Henry devoted his life to discovering, exploring and collecting everything related to medicine.

From a collection of scientific beakers to statues of ethnic dolls, this random collection made me question whether Sir Henry was in fact a hoarder? There were however, a few things that were amazing to see. Two of my favourites were Florence Nightingales moccasin slippers — still with intricate beading — and Napoleon Bonaparte’s toothbrush, bizarre but historic none-the-less.

From here we wandered into the section on modern science — my favourite part of the museum. With so much to see, it was hard to know where to start. The human made out of fat, or artworks made out of pills? Oh, decisions! Interestingly, this section explained the way modern science has aided, and in some cases hindered the human body. It was also quite interactive, a welcome change from just gazing at objects through glass.

Like all good places the Wellcome Collection had a café, which was an ideal place to sit and reflect on this curious place.