In Europe, soccer is a whole different ball game

You think you know passion? You haven’t met the European football fans.

by Gillian Bennet
in Expat Life 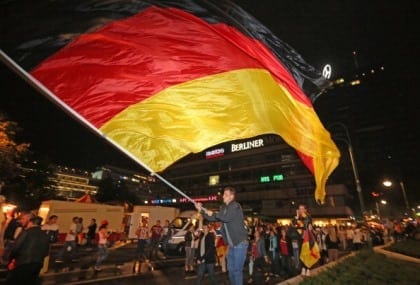 So, this is what real ‘football’ is all about.

When it comes to sport, Aussies are a very realistic bunch. Sure, we are passionate about our teams but as much as we hope they’ll win, we know what our chances are. We rejoice in victory and (usually) accept defeat gracefully while enjoying the banter.

Until I decided to move to the UK, soccer – or football as it’s called in Europe and just about everywhere else — just about passed me by. Yes, I would read about some of the teams in the news. My brother, being a huge soccer fan, would hear the latest dramas and scandals and tell me all about them. I never watched it though, or went to a game.

In Australia, soccer has slowly grown in popularity; the Sydney Morning Herald last year even said the game has been “closing in as the most popular sport in Australia over the last 3 years.” It’s certainly not there yet, though. So seeing wall-to-wall soccer on the screens over here in the UK takes some adjusting to when you are more used to sports like rugby league dominating prime-time back home.

Making the adjustment is certainly worthwhile though, if not necessary, if you want to understand this and any European country a little better, because football is such an integral part of their national psyches.

The first, most obvious and the hardest switch for some us is the name itself — you have to call it ‘football’ not ‘soccer’. Just do it. You won’t be taken seriously unless you do and we all know, even if we hate to admit it, that it makes a certain logical sense anyway.  Yes, you may cop some flack if you forget to switch it back when you speak to other Aussies but trust me; in the long run it’s worth it.

Once you have pushed through that barrier you are ready to ask your new local friends about the finer points of the game. It may take a few pints to get it; especially with so many different leagues, teams (there’s 92?!), rules and terminologies to learn, such as being relegated, loaning players to other teams and, of course, understanding when it’s ok to dive.

However, what will most surprise you, as your new footballing world opens up, is the passion of the fans.

My first encounter with this ultra-passion was after the Champions League final last year. Borussia Dortmund and FC Bayern Munich, two German teams, were playing at Wembley Stadium for European primacy. I happened to walk into a dominant Dortmund pub as the final whistle blew and the emotion of the loss poured out from the 200 plus fans packed inside.

Those who know me will say I don’t cope well with over-emotional people at the best of the times. So, with people crying, kicking glasses and head butting poles over the loss of a final, I was uncomfortable to say the least. My British friends behaved as if this was normal. They found it odd that I was just standing there staring at grown men in tears. It honestly made me think I had missed the breaking news about the end of the world.

The next time I experienced this level of passion was when I moved in to a London share-house. One of my housemates is particularly vocal about football. He is a huge supporter of Luton Town FC, a team that have just been promoted into the 4th division of English football, League Two (see, I’m learning!). When his team won promotion I heard a party popper go off but by the time I had jumped out of my chair in fright, the front door was wide open and the delirious housemate was off. He ran half way down our quiet street, on his own, at night, and back again, in wild celebration.

By the time the World Cup came around I was fully aware of what I was in for; or so I thought.

England games bring a whole new level of scrutiny and passion. All hopes are put on just one or two players. The press doesn’t help and are ruthless — especially when they get bundled out in the group stages.

Following the loss of their team’s second game and elimination, English fans fell in to two camps. First there were those in denial: “We still have one more game and we can win that,” was the refrain. Then there were the mortally wounded who just needed to be left alone to mourn. After a few days the pain of losing still hadn’t passed and fans were still indulging in the blame game. There will be for four more years until they do it all over again, no doubt. And a Germany vs Argentina final — the worst of two wars, according to England fans.

It has been exciting and eye-opening to experience the World Cup in a country that’s football crazy; from the in-depth analysis of Luiz Suarez’s infamous teeth to the history and background of the sport… not to mention the office sweepstakes. By the time 2018 and the next World Cup rolls around maybe even Australia can stake a claim? I know I’ll be watching every minute and cheering the Socceroos on wholeheartedly, thanks to Europe and its football fanatics.

IMAGE: Fans of Germany celebrate at Kurfuerstendamm after their team winning the 2014 FIFA World Cup final match between Germany and Argentina on July 13, 2014 in Berlin, Germany. (Photo by Matthias Kern/Bongarts/Getty Images)