LOST IN LONDON | Yes, I know the Jubilee was months ago. And yes, there has been, oh I don’t know, the little matter of the Olympics in the meantime to help delete the collective memory of the BBC's coverage pondering how many toilet breaks the Royals would have needed in their flotilla journey. 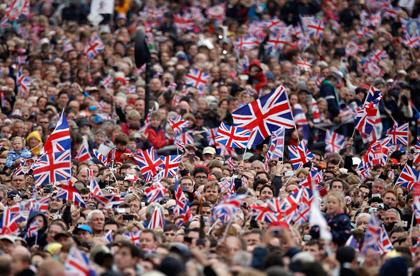 YES, I know the Jubilee was months ago. And yes, there has been, oh I don’t know, the little matter of the Olympics in the meantime to help delete the collective memory of the BBC’s coverage pondering how many toilet breaks the Royals would have needed in their flotilla journey. And yes, it is likely that by now the Queen has already had the world’s best scientists turn her into a part-Android so she can continue her rule on through to the Platinum Jubilee. But I don’t care. This is my forum and I rant what I want. Which is that, actually, after all the hype, I still feel decidedly under-jubileed (that’s a play on the word underwhelmed for those who wanted me to spell it out).

Don’t get me wrong, I have the requisite levels of colonial excitement for all things royal, particularly when it involves tabloid reports of Harry doing tequila shots out of a prostitutes belly-button or painting on black-face makeup to attend a ‘Show Racism the Red Card fundraiser’. And who could not have felt a surge of patriotism for their adopted homeland in the weeks leading up to the Jubilee when it looked like the Union Jack flag had had a boozy night out and then thrown up all over London.

So come the Jubilee weekend, I had even gone so far as to buy Union Jack coated vuvuzelas and was to be found, honking, instrument in hand, on the banks of the Thames with the rest of the city’s population. All there trying to catch a glimpse of what high-necked, full-sleeved, block colour shift dress Waity Katie (sorry, Princess Catherine — I don’t forget as easily as the English media…) was about to make this season’s high street must-have as she floated past.

There were boats, and there was champagne and strawberries. There were cardboard faced Queens and bunting galore. There was also rain, poking sticks disguised as umbrellas and more red trousers on display that the archives of  lookatmyfrickingredtrousers.blogspot.co.uk. Some even decided to express their patriotism through dressing themselves up like a trussed up turkey coated in Union Jack themed spandex.

Two hours later, although Princess Catherine had made an appearance on the big screens behind us to universal cries of “gahhhh, don’t she look loverly” and “but isn’t that the dress worn by that rapper Nicky Minge-whatsit last week?”, the Royals had still yet to grace the riverspace in front of us with their presence. And the royal subjects were getting angsty. By the time the boat trundled past, it was carnage, a cage-fighting free for all where children were being used as weapons — pushed forward into the melee to create a convenient space for the offending adult to follow. A successful tactic because who (besides me…) is going to palm a kid in the face and demand priority viewing rights. Unfortunately this only meant parents hoisted their children onto their shoulders, out of my reach, and my glimpse of the Queen was limited to the edge of her hat.

The rest of the weekend I fared no better. The BBC Concert was skipped over in favour of Friends reruns, and my attempt to have Harry and I lock eyes as the Carriage Procession made its way down the Mall was thwarted when I was denied entry at Green Park. Instead I was shepherded to the screens at Hyde Park, where my attention was diverted by a crowd of people gathered around two people in corporate advertising giving out freebies. Fine, I thought, I’d at least indulge my inner jubileess with a jubilee themed goody bag. A Union Jack encrusted cap perhaps, or a beach ball imprinted with the Royal insignia.

Missing the procession, I waited my turn patiently and was rewarded with ….. a roll of toilet paper.

And it didn’t even have Harry’s face on it.