Getting all confused about ‘Australian’ products in the UK

No dinner party attended by Aussies in London would be complete without a discussion of the baffling Ugg boot phenomenon. 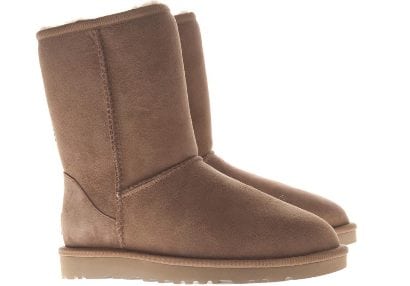 NO dinner party attended by Aussies in London would be complete without a discussion of the baffling Ugg boot phenomenon.

In Australia these sheepskin boots are considered a slipper, and are primarily worn inside the house to keep feet warm in the cooler months. This is reflected in the materials and design of the Ugg boot. The upper of the Ugg boot is untreated sheepskin, not dissimilar to suede and is not waterproof, or even water resistant. The sole is a light synthetic material, not necessarily durable for outdoor wear. The boot covers the foot and ankle, but does not necessarily provide any foot or ankle support. The price of AUD$20 and availability in the footwear section of K Mart or Big W also indicate that Ugg boots are a slipper.

UGG Australia ‘Ugg boots’ differ from the usual K Mart fare. They come in a variety of styles and colours, with a rubber sole suitable for outdoor wear. Perhaps the quickest way to differentiate would be to check the price tag, as a pair of tall UGG Australia boots cost a staggering £150-190 (AUD$250-$320). This is apparently a small price to pay for the boot loved by celebrities such as Oprah, Kate Hudson and Sarah Jessica Parker. Pamela Anderson was also a fan until 2007 when she announced:

“I’m getting rid of my Uggs – I feel so guilty for that craze being started around my ‘Baywatch’ days. I used to wear them with my red swimsuit to keep warm never realising that they were SKIN! I thought they were shaved kindly.”

Yes Pamela, they were shaved kindly — of their skin.

Another ‘Australian’ brand perpetuated over here is Aussie which produce hair care products. Surely they are Australian? There’s a kangaroo hopping across the label for crying out loud! Nope they’re American too, manufactured by Proctor & Gamble and not even available in Australia. The tenuous link seems to be that they use Australian ingredients in their products. While some of the ingredients they tout such as blue gum leaves, quandong and kangaroo paw flower are native to Australia, the Miracle Hair Insurance Leave-In conditioner advertisement claims that “Native Australian folk have relied on the healing properties of Jojoba seed oil for centuries.” This seems unlikely considering that Jojoba plants were introduced into Australia by the CSIRO in 1978.

However it is not just the ‘Native Australian folk’ who are having words put into their mouths by Aussie. The Aussie website contains some of the following priceless gems:

‘Ask any strapping Aussie male and he’ll tell you hops are amazing.’ (He’ll tell you a lot of things after a glass or two but who’s asking?).

‘Oh how we love Australian Wild Peach. It’s the next best thing to a strapping, hot lifesaver.’

‘ “Your colour looks amazing mate.” “Cheers, I use Aussie Colour Mate, mate.” Us Aussies like to keep things simple, but we make up for it in hair care!’

‘Can’t cook. Won’t cook. Neither will my hair.’

‘When things get hot, a little Aussie’ll help protect you way better than a strapping fireman ever could. And it’ll never, ever try and steal your limelight.’

So according to Aussie, Australians like beer, calling each other ‘mate’, lifesavers and simplicity. Apparently we definitely don’t like cooking, limelight stealing firemen or correct grammar.

They actually aren’t too far from the mark with what Australians do like, but they’re kilometres off on the dislikes — particularly the implication that we can’t cook. I think we should send round Bill Granger, Maggie Beer, Kylie Kwong and Tobie Puttock to set them straight on that point. They can be accompanied by an Australian fireman, who will calmly and professionally extinguish any fires and be thanked for his services by the chefs in a grammatically correct manner. In the interests of busting further Australian stereotypes, the chefs would not ‘throw another shrimp on the barbie’, there would be no comparison of knife sizes, no mention of dingoes or babies, no one would use the word ‘crikey’ and, most importantly of all, they certainly wouldn’t be going out in public in Ugg boots.