Fireworks fanatic: London lights up the sky in 2012

BRON IN THE DON | With fireworks featuring in the Timeout London Top 100, our resident adventurer made it her mission to see as many as possible in 2012 and crossed #39 — Fireworks, off her list. 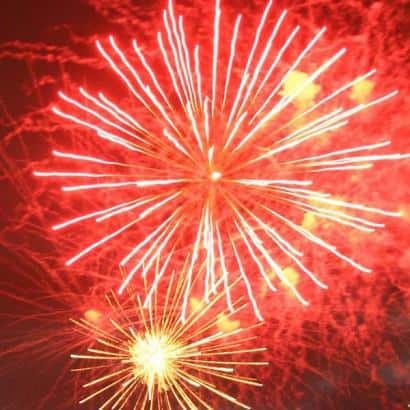 IT DOESN’T matter how old I am, or how often I’ve seen them – I’m a sucker for fireworks. When they burst into the sky I “ohhh” and “ahhhh” with the best of them. Living in London in 2012 during a year where both the Olympics and the Diamond Jubilee were major events, it was a perfect time to tick off number 39 on the Timeout London Top 100 List — Fireworks.

My first experience were the Diamond Jubilee celebrations in June. While I did spent the evening of the concert holed up at home, sitting on the couch in my PJ’s with a glass of wine, I was still lucky enough to get a glimpse of the fireworks display. Although only because I was standing on my tiptoes looking out the bathroom window on the top floor of my house. Realistically the view was better on TV, but it was still exciting to see the bursts of light and colour celebrating the occasion.

The next time the sky lit up over London was the Opening and Closing ceremonies of the Olympic Games. Like many others I was watching from the pub with my friends. Though it would have been amazing live, even on TV you could tell it was one hell of a show.

It wasn’t all televised fireworks in 2012 however, with Guy Fawkes Night in November one of the best opportunity to see fireworks in the city, regardless of where you are. Over the weekend of the 5th, you couldn’t go into a park without finding some fireworks celebration ready to spark. There were the local family events at neighbourhood commons, paid events at larger city parks, massive crowds lining the river, and of course lots of televised displays.

This year, we took advantage of the riverside view of the Battersea Park display from the other side of Chelsea Bridge. It was spectacular to see the colours flash across the sky and hear the bursts of gunpowder, although admittedly I’m sure I missed a bit of the atmosphere of the park’s celebration complete with choreographed music and a bonfire.

The year of sparkly things was brought to a close with New Year’s Eve. Like every major city around the world London had an amazing fireworks display to do us proud and close off 2012 — the year of fireworks in London.