After a decade of Brisbane’s year round comfortable climate, I was looking forward to watching the seasons change and London didn’t disappoint. 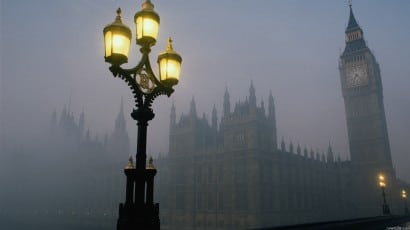 By Nina McGrath
The first sign of spring was the daffodils sprouting in the parks and churchyards, the riot of intense yellow trumpets silently heralding the end of winter. Great clouds of pollen floated through the air like a shifting yellow fog. My husband suffered from allergies for the first time ever, exacerbated by the pollen drifting in through the open windows at his work and settling in a thick coat on everything in his office.

In summer, London experienced ‘heatwaves’, defined as greater than 30°C during the day and greater than 15°C at night. HA! At 16°C I still snuggled under a doona to sleep. It was hot during the day though and with the buildings in London designed to keep heat in, not let it out, the daytime heat was felt by everyone, as evidenced by pedestal fans selling out across the city.

I was ridiculed for wearing sunglasses on my walk to work as Londoners seem to only dust them off for summer holidays and hangovers. However, the slightest rise in temperature or sprinkling of sunlight would see people of the capital out in droves. The parks quickly became packed with people lying around on beach towels, the men with their shirts off and the women hiking up their skirts to reveal expanses of pasty white flesh. Perhaps Pimm’s was developed to help Londoners cope with this sight. I first tried a premixed can of Pimm’s and lemonade and wondered what all the fuss was about. But one fruit-filled glass of Pimm’s at a pub later and I was hooked. I’m amazed Pimm’s hasn’t taken off in Australia; it would be perfect at a summer BBQ.

Autumn blew into London, teasing buttery yellow leaves from the trees and sending them skittering along the paths and roads. Every time I left the house I’d be greeted by a school of leaves dancing up the path towards me. The leaves finally settled on the ground making it look to me like giant boxes of cornflakes had been spilt all over the city. Showers blew through turning the leaves into a slimy brown mush that made footpaths dangerously slippery, particularly after dark. The days grew shorter and shorter, soon the alarm was waking me early enough to see the sunrise and I’d see the sunset on our way home from work. Once the sun started setting before I left work, I knew winter was on the way.

My first winter saw record snowfall in London. Snow fell in late October, which hadn’t happened for 74 years. This and any subsequent snowfall sent the Australians and New Zealanders rushing out into the streets to play while our English colleagues looked on bemused.

In February, London had the heaviest snowfall for 18 years which brought the city to a standstill. My husband and I made snow angels on the footpath and a snowman in the garden. We helped a stranger push his car out of the snow and even had a brief snowball fight. The roads and footpaths became treacherously icy. Whilst crossing the road in front of a black London cab my boots lost grip and I did a crazy cartoon-like dance, running on the spot with my handbag swinging about wildly at the end of my arm as I tried to use it as a counterweight. I managed not to fall, regained my balance and finished crossing the road, only to turn back and see the cab driver laughing so hard he was having trouble driving off.

Despite the early and heavy snowfall, a white Christmas eluded us. I knew it was unlikely but gave up all hope when I saw this quantified by bookmakers who offered odds of a white Christmas of 7:1 and odds of no white Christmas of 1:16. If you are considering placing a bet this Christmas, a Christmas is considered ‘white’ if a single snow flake is observed falling onto the roof of the London Weather Centre in the twenty-four hours of 25 December. Even though there doesn’t need to be a decent quantity of snow, there are usually very few takers.