Don’t remember what happened last night, or the night before? Or the night before that? Drinking in London is a nightly affair rather than a weekend pastime, which makes attempts to sober up even more difficult.

I realised early on the drinking culture in London is a little different compared to my hometown, Brisbane.

In Brisbane, stories of binge drinking teens and young adults litter the pages of the Courier Mail or local rag, and in-depth analysis claims most violence and alcohol fuelled mayhem occurs on Friday and Saturday nights between midnight and 4am.

Meanwhile, in the UK it is not uncommon to see work colleagues and friends out for a drink on a school night. In my experience it is almost considered acceptable to turn up to work every so often with a hangover, or still drunk from the night before.

I was thrown into the pint glass, so to speak, and had to quickly learn which of the 200 plus pubs and clubs in the City of London offered the best deals, the best dance floor and the best ales when I was working there. Lucky for me, I discovered the ‘trick of the trade’ for a personal assistant/team secretary in the City was to know all about the bars and the beers. 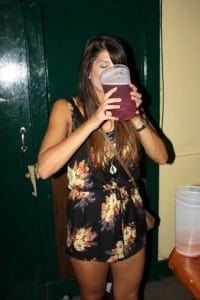 Since I am a great believer in researching (and yes, that’s me – above – with my face in a bucket of snakebite) before recommending, it wasn’t long before I was well acquainted with events staff at most major pub chains, and became the key contact for those in the office searching for a good deal on a night out.

With this kind of attitude towards drinking during the work week, I was unsurprised to find that British men and women reportedly drink over the recommended weekly alcohol limit (21 units for men, 14 units for women) and some regularly drink harmful quantities (over 50 units for men, and 35 for women). And binge-drinking and drunken behaviour are not unusual among older adults aged 30 to 50; quashing the theory that we become more moderate with age.

Further evidence from the Medical Research Council reveals middle-aged drinkers in the UK still face pressure from their friends and peers to drink.

Sometimes not drinking on a night out with friends, or work colleagues, requires more explanation. Excuses such as ‘I am calorie counting’ or ‘I am participating in Go Sober for October’ are frequently used to get out of a large drinking session. While the phrase, ‘I’m not drinking tonight’, simply can’t be uttered without some shame or embarrassment.

While working in London I was constantly amazed when people turned up to work so hung over they couldn’t concentrate, or they’d brag of still being pissed from the night before. Surely this is more embarrassing?

I don’t have anything against alcohol, and I have often succumbed to one-too-many, but I do have a problem with the peer pressure to drink. Examples of the pressure we are faced with are drinking games such as Kings and Beer Pong, which admittedly I have eagerly taken part (or instigated). They are considered social entertainment but actually promote risky drinking in dangerous quantities.

Why is it young people and, more evidently, adults are getting drunk for the sake of it, without consideration of the consequences? Well, the mental and physical health issues caused by alcohol are usually the last thing on your mind when you lift the first cold pint of ale to your lips after a long day at the office.

Maybe you are a binger?

Apparently it is only when you find it hard to stop drinking once you have started your binge that it could actually be alcohol dependence.

Some studies show drinking a large amount of alcohol over a short period of time may be significantly worse for your health than frequently drinking small quantities. Perhaps this is why people in London, in a bid to avoid binging, try to span their drinking out over an entire week?

In many cultures where consuming alcohol is off limits to those under the age of 18 or 21, we tend to be drawn to it as soon as we are of legal drinking age; like drunks to a pub. But when did drinking in dangerous quantities and ridiculous drunken behaviour become socially acceptable?

Also by Jacqui on Australian Times:

Preparing for your return home to Australia: the countdown is on

Read Jacqui’s blog about her overseas working holiday adventures with her husband: NeverEndingHoneymoon.net

TOP IMAGE: (By Eagletonc / via Pixabay.com)