Great coffee and fresh air, what more is there to life? Giddy Up have combined the two with five outdoor coffee carts set up at various locations around London. Coffee Cult visited manager Lee Harte at a stall in Islington. 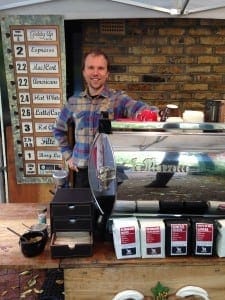 IN a densely populated city like London, where the centre can feel like a concrete jungle, it’s no wonder the English share a kindred love for their beautiful parklands.

It was one of the first things Coffee Cult noticed when we arrived here, particularly throughout the warmer months. In some areas, barely a patch of grass is visible at lunchtimes and on weekends as vitamin D deprived Londoners soak up the rays — never sure when they will feel the sun’s kiss again.

In East London, the yummy mummies and rad dads watch on as their cute-as-a-button chino-clad children cut loose on their scooters. In the North, the swimming ponds (yes, ponds) at Hampstead Heath have provided swimmers with somewhat muddy relief from sticky, stagnant summer days since the mid-1800s. Mid-week, groups of twenty-something socialisers gather at their favourite patch after work, and cook up a meaty feast on disposable barbecues, ciders in hand. Squirrels scurry up tree trunks with eager dogs in hot pursuit, their owner’s frantic calls to no avail.

It’s no sandy beach. However the parks of London come pretty darn close to being one of Coffee Cult’s favourite haunts in the summer months. After all, who wouldn’t prefer to enjoy their coffee sitting perched on a picnic rug under an oak tree? Introducing, Giddy Up. 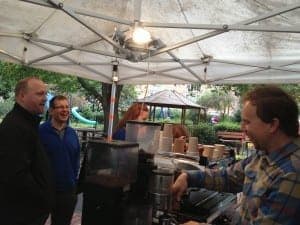 Out of Giddy Up’s five stalls, two are located in parks in the Islington area. The flagship opened in May 2011 in leafy Fortune Park, so they’re certainly not the new kids on the block. This stall is where we decided to meet owner Lee Harte for a coffee and catch up.

Apparently we were lucky to catch him there on this particular day. Many of his regular customers exclaimed with delight when they spotted his familiar smiley face behind the La Marzocco machine. In addition to managing other Giddy Up locations, his involvement with Coff Up – the Liberum Capital and St. Giles Trust initiative to get ex-offenders back in the workforce – has been keeping him busy.

A steady stream of customers came and went, mostly regulars. The machine, two grinders, a few bags of Square Mile beans, and the baked goods of the day, fit perfectly atop the wooden cart, with a little room spare for Lee to pour his perfect rosettas. 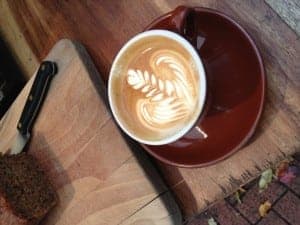 Many take a moment to quaff their coffees and chat with him about beans and machines, and watch on with keen interest as he talks them through the correct way to use an AeroPress brewing device. The coffee itself was outstanding, perfect strength and temperature. Coffee Cult tastes a strong and sweet fruitiness on the palette, and we soon discover this is a fitting description of the seasonal Sweetshop blend by Square Mile.

If you need a little sugar rush, then Giddy Up won’t disappoint. This particular day it was banana bread on offer, baked fresh in the small kitchen behind the Fortune Park stall. This little space bakes enough to service the two Islington sites plus Floripa in Shoreditch. Coffee Cult has also spotted Cadbury smothered Anzac cookies in the past, so it’s well worth a visit just for the sweeties alone.

After making the move to Melbourne in 2000 from Shepparton in country Victoria, Lee realised his passion for coffee, and alternated between barista and manager at a number of different venues over the next nine years. He then cut his London teeth at Dalston coffee institution Tina, We Salute You, where he quote unquote “fell into the Square Mile crowd”. Following that, a stint at the Pitch 42 cart on Whitecross Market sealed his fate, and before he knew it, Giddy Up was born. Two and a half years later, there are five stalls around London, and plans for a permanent Giddy Up shop one day in the near future.

You certainly get your money’s worth at Giddy Up; proper coffee, interesting but approachable caffeine conversation, and a strong sense of the familiar. One visit to Giddy Up and we guarantee you’ll be drawn back again and again, like Londoners to the comforting warmth of the summer sun.