Coffee Cult weathered the weather and discovered Brickwood Coffee & Bread in Clapham Common is the perfect place to retreat from the elements, and indulge in some beautiful food, great coffee and delicious desserts. 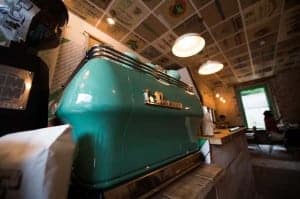 CALL us what you will, but Coffee Cult doesn’t find the idea of getting caught in the rain at all romantic. In fact, after living in London for close to 18 months, we would be quite happy to never see another drop of the stuff ever again.

As you can see it is fairly easy to get sucked into a Londoner’s favourite pastime — moaning about the weather.

At either end of the hot or cold extremes, Transport for London goes into meltdown and it is possible to experience the entire four seasons whilst en route to your destination. For example, anyone who payed for Bikram yoga classes last summer wasted their hard earned pounds — they could have just hopped onto the Central Line tube.

The moral to the story is, when the elements and transport are misbehaving, do as Coffee Cult does and retreat into a welcoming haven of lattes, brunch and cake — cue the brand-spankin’ new Brickwood Coffee & Bread. 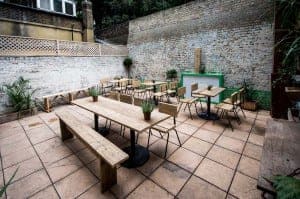 If cafes were classified into seasons, then Brickwood would be a crisp spring day.

Reclaimed scaffold floors and recycled wooden furniture are complemented by touches of aqua and green — a custom La Marzocco machine, cups and saucers, door frames — which all add to the effect of new shoots on a tree just emerging from its winter slumber.

Exposed brick walls and copper pipe light features give the café an earthy, pared-back feel, and a large paved outdoor courtyard has year-round potential if shading and heaters were to be introduced. 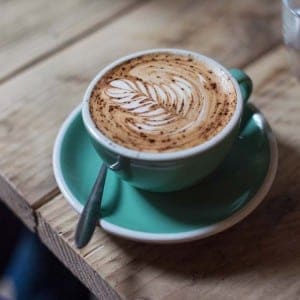 On this particular morning, the heavens had opened up in a shower of miserable drizzle, so Coffee Cult was in the mood for a good dose of caffeine. Brickwood’s tattooed barista came through with the goods, and although the milk could have been heated for a few more seconds, the brew by Caravan really hit the spot.

When our food arrived our attention was instantly drawn to the scrambled eggs with smoked salmon, chives and feta, piled high on toasted sourdough from Bread Bread one of Brixton’s top artisan bakers. They wobbled with delicious buttery goodness as our waiter set them down, and tasted as perfect as they looked.

Poached eggs with smashed avocado (borderline guacomole) and chorizo was simple and satisfying, eggs poached excellently, and a side of crispy maple cured bacon tamed our inner carnivores. Corn fritters with roast veggies, halloumi and a poached egg were also impressive — the fritters crisp on the outside, dense but soft in the middle.

Coffee Cult blamed the cooler weather for unashamedly indulging our sweet tooth, but how could we say no to grilled banana bread with espresso butter? Aussies will love the Tim Tam muffins, and our tastebuds despaired at the news that the chocolate and Guiness cake was in the oven. Proof in the pudding (so to speak) that all the sweeties are baked daily on the premises. 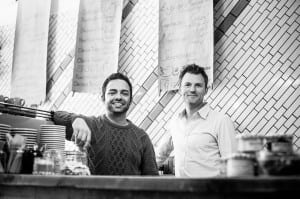 Open since late August 2013, Brickwood is the brainchild of restaurateur and consultant Jayke Mangion and local entrepreneur Stefan Boehm. Mangion, originally hailing from Melbourne, has his finger in a lot of hospitality pies, and prepares the meat for Brickwood’s sandwiches at his Battersea establishment Entrée Restaurant & Bar.

A much needed breath of fresh air for Clapham Common’s café scene, Brickwood Coffee & Bread ticks all the boxes. Excellent food, top-notch coffee and a welcoming, approachable space. A perfect place to stop, reflect, and let the wet and windy world go by.