Clipping your way to London’s line in Greenwich

Not one to waste opportunities, our London adventurer saw the chance to knock two off her London Top 100 list when she travelled out to the quaint area of Greenwich. 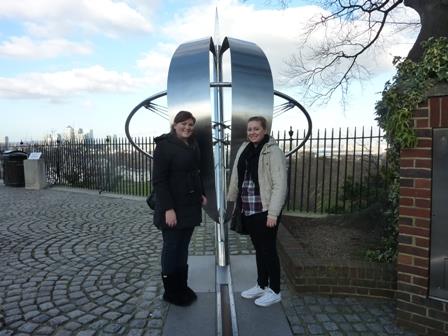 NUMBERS 15 and 91 on London’s Top 100 list seemed perfectly suited to each other. So deciding to kill two birds with one ferry, I took the Thames Clipper (#15) to historical Greenwich (#91) for my next adventure. Getting the Clipper is one of the best ways to get from the city out to Greenwich and with an Oyster Card, a one-way Thames Clipper ride to the home of the Mean Line is only £4 from Embankment Pier.

It’s a pretty cheap ride of the river and a great way to see the city. From Embankment you can see Westminster, London Eye and you head east down the river passing the Tate Modern and Tower of London. After that I was in unchartered waters as I had never ventured along the Thames past the Tower of London. It was really fun out on the water looking at all the buildings and residential area along the Thames. After what seemed like a short, quick ride we arrived at Greenwich (having passed many waterfront pubs and the striking metropolis of Canary Wharf).

There is a lot to do out at Greenwich so we decided our first stop was to check out the Greenwich Market. The market offers fresh food, clothes, jewellery and other bits-and-bobs and is the perfect place to grab a snack and wander through to the other little streets behind it. Beyond the market there are little lanes with boutique stores and cafes that offer anything from lollies to naval antiques.

After a wander through the area we started the slow ascent up to the Royal Observatory. Home to the Mean Line, which as we all know marks the point of Greenwich Mean Time,  I like to think of this place as the edge of the world. Located at the top of the hill looking out onto green parks with the Maritime Museum in the forefront and the rest of London beyond, the view is worth the steep incline walk to the top. Once up there you are able to see the official measures of yards, feet and a 24 hour clock. I can recommend getting there just before 1pm GMT (I got there at 1.03pm) when the red Time Ball drops down as an official signal of time.

Entrance into the Royal Observatory is £7 which gives you access into the building and into the courtyard with the Greenwich Mean Line. Although for those of you on a budget or not fussed on stars or clocks you can head around to the back of the building for free and see where the Line meets the courtyard and still stand on the edge of the world. We headed into the observatory and wandered through the exhibitions on the Royal Astronomer’s work in deciphering the stars and into his apartments and chambers. From there we wandered through other exhibitions focusing on world time, clocks and navigation. It was really interesting to read about how world time was developed and see some beautiful old clocks and telescopes.

Once we had checked out the Observatory it was time to head into the courtyard and grab a photo. You can find the timezone of both Sydney and Canberra (as a Brissie girl I was a bit disappointed not to find my home town) and get as many photos on the line as you want. Although there can be a bit of a queue to stand at the top it is worth the wait and sign language to other tourists on how to use your camera is a welcome amusement. 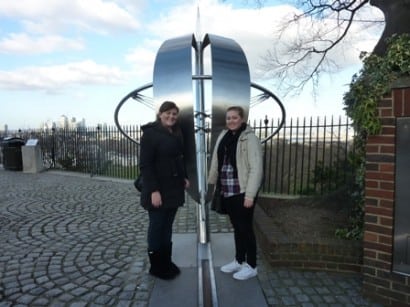 With our heads full of stars and minutes, it was time to wander through the park down to the Maritime Museum. The free museum has great exhibitions and paraphernalia from the seas, ships, beaches around the world and throughout history. There is also the Queens House (also free) featuring a wide art collection but after two museums we were ready for a sit down and some food. Luckily out in Greenwich there is lots to choose from with many pubs, cafes nearby however we headed to the Fish and Chip Shop (so originally named) which has served fish and chips on the same site since 1770. After grabbing a cone of chips and a potato scallop (does anyone else miss these at their local chippy?) we headed back to the DLR to get a ride back into the city. The book recommends spending a day in Greenwich but a day out there almost isn’t enough!