Clare Stewart grew up in the small country town of Korumburra in Victoria where a cinema visit was a half-hour drive away and a rare childhood treat. Clare has translated her love of film into a successful 19-year career in the film industry, including five years as Sydney Film Festival Director. Clare Stewart is now Head of Exhibition at the British Film Institute (BFI) and Director of the BFI London Film Festival and the BFI London Lesbian and Gay Film Festival. 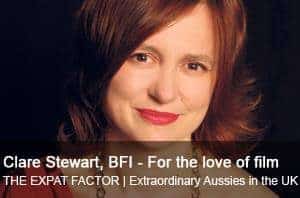 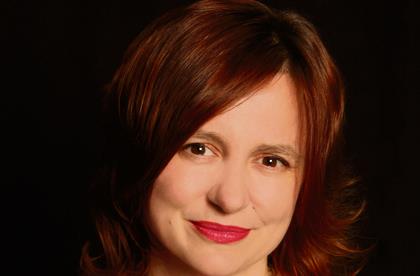 I moved to the UK in October 2011 because of the job as Head of Exhibition at the BFI. I had already decided to make the Sydney Film Festival (in 2011) my last when I found the advert for this role. I was very excited because it was a rare opportunity — a position where you are responsible for delivering both the major international festivals and a year-round moving image programme. I’d done the Sydney Film Festival and also been Head of Film Programmes at ACMI in Melbourne — the two parts of the job — but I hadn’t done them simultaneously. I had always thought if you were able to do both, you would have many more exciting programming opportunities.

London has exceeded my expectations because I must admit I had a deathly fear of the idea of grey. Prior to my move here, I would usually come to London for the three days between the Rotterdam Film Festival in January and the Berlin Film Festival in February. I was usually here for three very horrible grey days running around trying to have as many meetings as I could with sales agents, talent agents and producers. I didn’t see the city in its best light.

It was such beautiful summer weather when I came for my job interview here that it took me by surprise. The day I was offered the job it was a 30-degrees and I was wearing open-toed sandals and a summer frock. And I thought this is going to be fine; I can make the transition — no problem! London hasn’t exactly continued to deliver on that weather promise but it is a very culturally rich and iconic city. On a daily basis, it is still a thrill to do the walk in to work though Soho and across the Thames into Southbank. There is something very exhilarating about the feeling of being in the thick of such a rich metropolis.

I’ve worked internationally for many years and so I’ve always said that I have a second life on the film festival circuit. There is actually a group of friends and colleagues that has developed over the years that I see at different cities all around the world at different festivals. I feel that has made the move to London a lot easier than it would have been otherwise.

In the UK, I am frequently described as “direct”, or my favourite was “bubbly and no bullshit”. Working in Australia, people are very forward about what they think. In the UK, there is a lot more consideration of effect, which can lead to more politics. I find it really intriguing and enjoyable but it is also quite challenging.

Being in the UK, I’ve learnt that often my ideas get ahead of me and I can start communicate in a kind of cultural shorthand. So it’s very important to remember that our points of reference are not all the same, take a breath and slow down and make sure everyone is coming with me on the idea or the journey, not just be impatient to get to the result. But maybe I always knew that about myself.

Some changes I made to the BFI London Film Festival last year were to expand the footprint of the Festival in London and to introduce a playful and accessible approach to the programme. Last year, we changed the model of the festival and took it out to more cinemas in other boroughs — places like Hackney and Bethnal Green — and expanded our use of venues that we were already using — in Brixton, for example, whilst maintaining the festival core in Leicester Square and BFI Southbank. We also changed the programming approach, moving away from categorising films on the basis of their geography. Instead we introduced programme sections that had titles like Love, Thrill, Laugh, Dare, Journey, Cult and Debate that were much more defined by the kind of experience the audience might be looking for. Choosing from over 200 films can be a very daunting prospect, and these programme sections are designed to help people navigate the huge wealth of films on offer. I am very proud that the attendance increased by 13% with this new approach.

It was a real honour to be invited on to the Sundance jury for US Drama (earlier this year). It was a very dynamic and strong opinionated jury with Tom Rothman, co-chairman of Fox Filmed Entertainment for 18 years; actor-director Ed Burns; the fantastic cinematographer Rodrigo Prieto who shot Brokeback Mountain; and Wesley Morris, a terrific film writer from the US who won the Pulitzer prize for film writing last year. I love the opportunity jury work gives you to go into depth of discussion. It is a considerable responsibility because the prizes you are giving out have the capacity to really assist people with their career development. So it is something that I take very seriously (though its also very pleasurable of course!).

One of my favourite secret pleasures is sneaking in to watch a film at BFI Southbank. I work every Sunday since it is the only time I can work uninterrupted. I have started a Sunday night supper club with a similarly workaholic friend to ensure we leave our respective offices at a reasonable hour and it is something I very much look forward to. On Saturday, I swim, I walk in Regent’s Park and I have coffee at Kaffeine on Great Titchfield Street. I would usually try to get in a gallery or some dancing with friends on Saturday night as well.

I’ve only been back once to Australia since I arrived (in the UK) and it was really confronting. Australia suddenly seemed like a very expensive place to live, which it had never seemed to me before. It also seemed a very comfortable place to live. The riches of our foodie culture, our cultural life, our sporting outdoors — all of those things add up to a really extraordinary lifestyle. It’s much clearer to see that and to put that in to perspective when you’re away from it and return. The recession is much more present here in politics and in daily life.

What’s next is my second London Film Festival (October 9-20) and the year-round programming at Southbank. We have got some really exciting stuff coming up in May and June including retrospectives of Lars von Trier, one of the enfant terribles of cinema, and also Werner Herzog. Both those programmes are going to be really terrific and I’m excited about that.