BRON IN THE DON | With Olympic fever officially gripping absolutely everyone inside the English capital (and possibly the world) our resident adventurer set off to explore the vibrant hub of London 2012 - Olympic Park - and mark #7 off her London Top 100 list. 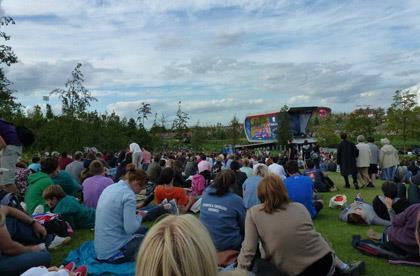 I HAD been lucky enough to have a family holiday when the 2000 Olympics were held in Sydney and I remember enjoyed the fleeting visit we had to the park to see the Hockey Quarter Finals. But in the lead up to London’s 2012 Games I was one of those people complaining about the disruption to my commute and the dreaded amount of tourists descending on the city (yes, slightly hypocritical I know). But after seeing the amazing Opening Ceremony and being a part of the atmosphere in the pub I was high on Olympic fever. I followed the ceremony with two days of Olympic viewing so much so, that I had succeeded in creating a perfect butt groove in the couch.

While I did miss out on tickets to any of the Games I was lucky enough to score a £10 ticket into the Olympic Park, and even if this wasn’t #7 on my London Top 100 list, I would have checked it out anyway. The ticket gave us entry into the Park without getting inside the venues but we still had a great chance to be apart of something amazing.

The Tube ride out there was a dream and we wandered through the shopping centre, helped along by the friendliest volunteers and made our way through the gates with ease. It was a completely different experience than what I had expected! Once we were inside we headed to the outside of the Olympic Stadium, stood under the Orbit and made our way into the Orbit Circus. The circus is a food and social hub of the Games with many food vendors surrounding some picnic tables and umbrellas. Even though there was a wide variety of food available we still decided to go with the major sponsor and talk of the town – Maccas – it is the biggest one in the world after all.

The Olympic Park isn’t just sporting arenas – although these do look impressive from the outside. There are also cultured gardens where you can wander along a canal; art installations; a bandstand; shops and restaurants; and even a cinema experience. There is so much to do that it didn’t really matter that we didn’t have tickets as we wandered around. As you guys know – people watching is one of my favourite hobbies – and this was a perfect place to do it. From whole families dressed in matching Union Jack onesies to the bright orange wigs of Dutch supporters and of course some green and gold Aussie tracksuits – the whole place was filled with people just coming out to support their countries and their home athletes. The volunteers were fabulous, always friendly and asking questions about your day, which was such a normal change from the stony silence of Londoners, I think I am still in shock.

I did manage to see some sport while I was there as they have two massive screens set up in the park where you can sit and watch the coverage. I was there on the day that the Team GB Men’s Gymnastics won their controversial Bronze Medal and I could hear the cheers of the crowd from the Hockey Stadium as GB beat Argentina.

The only downside was not being able to see the flame. I’ve got the typical photo of me pretending to hold it from the Sydney games and I was looking forward to recreating the magic. There are still plenty of photogenic points – one of my favourites are the multi coloured rings right up on the hill – with a games steward ready and raring to take a photo if needed.

The whole experience was fantastic and is just another great event that is a highlight of my time in London. Olympics happen in a city you live in probably once in a lifetime so I am glad that I got out of my pre-Olympic-funk and embraced them! Make sure you do the same!