Can I leave the Heathrow Injection at the departure gate?

It’s change-over time right now in the English capital. As a new flock of Aussies arrive to the joys of London life, many are also leaving. LIAM FLANAGAN found out that’s it is actually much harder to leave than it was to arrive.

by Liam Flanagan
in Expat Life 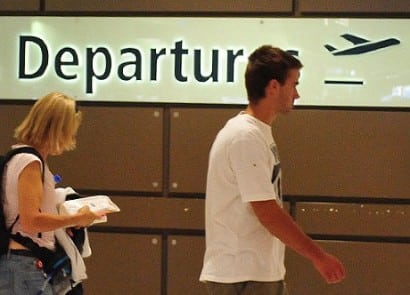 JUST like the brilliantly animated movie about a man who floats away in his house using just balloons, my time in London is UP! (Puntastic!)

And with my departure imminent, I’ve had to clean out my cupboards both at work and home and make those difficult choices of what to keep and what to throw away.

I’ve also had to decide which arm and which leg to give up to pay for shipping my excess baggage back home. I’m astounded at the ability of humans to accumulate crap, it’s as though we’re scared that if we throw away that dog eared copy of The Girl with the Dragon Tattoo or the charger for our old mobile phone we might find ourselves in a position where we actually need that stuff.

So I had to steel myself with a ruthless resolve as I sorted through the rubbish I’ve acquired during my two year stint and make the tough decisions.

Things I’ve decided to make room for and bring back to Australia:

–          Snowboard + equipment: Cause nothing screams “awesome two year overseas adventure” like sporting equipment that you are never likely to use again in Australia.

–          Notebooks: My personal thoughts noted down throughout my adventures will surely be of value to future historians. They will marvel at the illegible handwriting and wonder why most of the journal entries begin with “Hungover again…”.

–          My Winter Coat: I’m never likely to actually need this item of clothing in Australia. Its thickness and insulation would have me sweating up a storm in even the coldest of Aussie winters. But it single-handedly got me through the winter of 2010 and my heart would have to be as cold as said winter to through it away.

(Please note if you see anything in this list you like the sound of, feel free to swing by the house and pick it up and save me the “extra refuse” charge.)

–          My guitar: I bought this with the intention of becoming a virtuoso in a two year period. I no longer have a need for it as I’m pretty sure that being able to play the first half of ‘More Than Words’ by Extreme classifies me as a virtuoso.

–          My tent: My portable home during my travels, the tent has seen almost as much of Europe as I have but it never quite recovered from that last trip to Spain and the endless Sangria fights.

–          My Oktoberfest jumper: Seemed like a good purchase at the time. In reality, when is an item of clothing bought from a man in a caravan ever a good idea?

–          The Heathrow Injection: Is this something I can declare at customs? I guarantee you it’s not going to fit in the overhead lockers and I’m not going to pay an excess baggage fee for it. Surely they won’t let me back into Australia with this. The smell of two years worth of Yorkshire puddings and beer will have a sniffer dog ominously sitting next to me before I even hit the tarmac.

Some possessions provide us with a memorable link to our experiences and adventures. Others provide us a reminder of how we could’ve afforded a few extra weekends away if we didn’t buy so much crap. But we can’t take any of it with us when we die (unless you’re one of those ancient rulers who likes to bury your stuff with you) so who really cares?

London, it’s time to say our goodbyes but unlike Rick Astley (below), I am gonna give you up (Puntastic #2)… for now.