I sacrificed a lot for the love of my life, travel, and it had always given back. But then something changed... 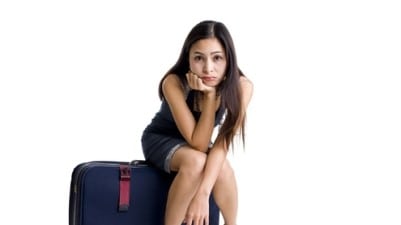 It’s never easy when a significant relationship ends. Whatever the reason for the split, it can turn your entire world upside down. Unfortunately though, every relationship has rocky moments.

But I thought this relationship was different. I knew there would be bumps in the road, financial struggles, droughts and even ruts. But I didn’t expect it to be this bad.

For so long, I had been loyal and constant in my love for travel.

My relationship with travel had begun on a high note of excitement and hope for the future. Like a drug, I became hooked on travel. I was obsessed. Travel allowed me to realise my dreams and let me live them in the way that I wanted to. I adored travel. Travel also allowed me to open my eyes to the world and grow as a person. I was in love with travel.

I was delusional in thinking the honeymoon period was going to last forever. I should have known better, as there were certainly ups and downs along the way.

There was that time that my flight was cancelled and I almost missed New Year’s Eve in Melbourne. And the time I dropped a heavy glass door on my leg and struggled to find a doctor in New York who would x-ray me without travel insurance. There was the time our travel agent forgot to tell us that our flight was bumped forward and we spent an awful day passed out on the floor of the airport in Vegas, still hung-over from the night before. Then, of course, the pub crawl in Paris where my bag and passports were stolen moments before I tripped over the gutter and broke my foot. That one earned me foot surgery and three months recovery… in a cast… in France.

I had sacrificed a lot for travel and it had always given back. But something changed.

It started with what I suspected was food poisoning. We were in Manchester to watch the Aussies dominate the Kiwis in the Rugby League World Cup final. It was a brilliant game, for the Aussies at least. Later that night, whilst dining out in one of Manchester’s famed curry houses, I was struck down with the most awful stomach bug. Even though I didn’t have a chance to sample the Indian food, I was on a downhill spiral that would take me weeks to resurface from.

As we approached Christmas my stomach sunk with anticipation of our upcoming travels. It was the first time that I was not looking forward to our holiday. I could feel the resentment growing.

Boarding the airplane at Gatwick airport was a short lived dream. I was terrified to be further than a short run from the toilet and my stomach was curling. In the end, we disembarked the flight and the airline staff helped us make our way back through security. The rest of the night was spent in the waiting room of the A&E until I was finally seen by a doctor and referred to a specialist.

Four days later we made it to Krakow, spent two nights holed up in a hotel room and then five nights in Berlin where I was able to consume little and barely move from our apartment. It was a holiday I almost wish I could forget.

I was defeated. In my state, travel was no fun. It provided me with no support and taunted me day and night. We missed seeing Copenhagen, Prague and Krakow. I was too unwell to enjoy New Year’s Eve with friends on the streets of Berlin. I felt like it was my fault. Why was travel doing this to me?

That wasn’t the only trip that was ruined. I was still too unwell during the following February to join my friends on a ski trip to Serbia. It was during that week, around the same time that I was admitted to hospital for further tests, that I realised my love for travel was slowly dying.

I started flirting with other dreams and had thoughts of stability and comfort. Things that I thought I didn’t have a place in my life. I started to re-pin home décor posts on Pintrest. I signed up for email newsletters for RealEstate.com.au and curled up on the couch to watch Grand Designs. I felt like I was cheating on travel but I was nostalgic for the sweet excitement of a new relationship.

Is there a time in every traveller’s travelling life when they reach this point? Is this the first sign that you should turn back?

I didn’t give in that easily, though. I want to live a life of no regrets. So, I determined to give another go; just one last fling, for old time’s sake.

Read more of Jacquie’s experiences as an expat: