Ben MacCormack moved to London in March 2011 to take on the role of General Manager of AFL Europe to develop the sport of Aussie Rules in Europe and the UK. Since then he’s helped run three Euro Cups, the AFL European Challenge, and met the Queen at Buckingham Palace. 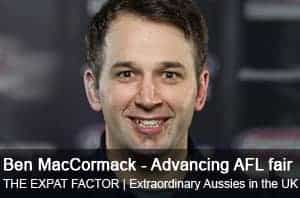 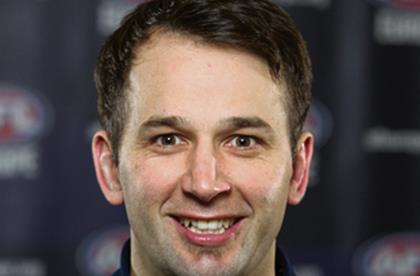 I moved to the UK in March 2011. My wife and I had always spoken about living, working and travelling in Europe, however it always seemed there was a reason not to — like starting a new job or buying a property. Finally everything aligned, and there was no real reason not to give it a go.

We originally planned to come for six months, and if everything failed — call it a great holiday and head home. However, I secured my current job as General Manager of AFL Europe two days before leaving Australia which set me up for the long haul.  I had completed a Masters in Sport Business in Australia, which led to my first job in sports development and administration with Gymnastics Victoria. Since then I have worked with AFL NSW/ACT and the ACT Government in Sport and Recreation.

The role of AFL Europe is to grow the profile of Australian Rules Football in Europe including the UK. The biggest challenge in London is getting more British people involved. Although we have the professional product on ESPN showing three live games a week in this market, activating someone from armchair fan to player can be difficult. It helps that many in the UK are familiar with Gaelic Football, which is definitely the most similar sport to AFL. We are currently running talent ID programs in Ireland and the rest of Europe. Ireland has potential to keep producing elite AFL talent such as past stars like Tadhg Kennelly, and the new crop are now showing they have what it takes.

The future of the sport in the UK is at the local club level, and our clubs are always trying to recruit local players. Across regional areas the game is growing rapidly, driven by Brits. A lot of success has been had by PE teachers with access to scheduling footy into the curriculum. It is a very exciting time for the sport in England and the rest of the UK.

The weather here impacts the growth of outdoor sports. It is an issue our leagues have dealt with by moving the season to summer. This ensures more play days, however it does reduce the availability of ovals around the country as it clashes with the cricket season.

I would have to say a career highlight has been meeting the Queen at Buckingham Palace. Also, I am very proud of the events we have run, including three Euro Cups. The recent AFL European Challenge at the Oval, where the Port Adelaide Power and Western Bulldogs came over to London for an exhibition match, was a fantastic way to showcase the game in the UK. These events are important to provide an opportunity for Aussies to get their footy fix and European fans to see the sport up close and personal. We have a couple of big projects in the development phase so hopefully there is something for the Aussie expats and locals to get excited about in the coming years as well.

There’s a lot of travel involved in this job — heading to countries like Iceland, Croatia, Russia and Italy (to name a few) to find passionate Australian Rules players and volunteers to help grow the game that so many Australians grew up following. However, I really enjoy quiet weekends here in London, as it is such an amazing city. The countryside too is spectacular, and doesn’t get the recognition with Aussies that it deserves. We are all in such a hurry to get over to the continent that regional UK gets overlooked.

Weekends in the UK are the only time I get to watch games, and meet with the volunteers and players of the sport. My wife and I also spend time catching up with friends in a park or a pub. It’s probably not a secret, but the Holly Bush near Hampstead Heath has to have the best pork belly roast in London. We have been back a few times! I’d also recommend Living Social as a great way to discover restaurants all over the city.

What I miss about Australia is BBQs after work, and being able to sit in our garden and play with the dog. Family and friends are missed as well, although technology helps us stay in touch much better than you could 10 years ago. Also, I have been shocked that the wages here are so low, yet the cost of living feels about the same. I would say to anyone coming to the UK to be prepared for some initial challenges with setting up your UK life but go with it and you’ll have an amazing experience.