Aussie entrepreneur onto a winning formula with Golightly Wines

It’s every Aussie’s dream. Starting your own business in the UK that guarantees you not only a free-flow of diet-friendly and delicious wine, but also earns you the attention of Richard Reed and Richard Branson. For Aussie entrepreneur Nicole Lambe, this dream is now a reality with Golightly Wines.

by Erin Somerville
in Expat Life 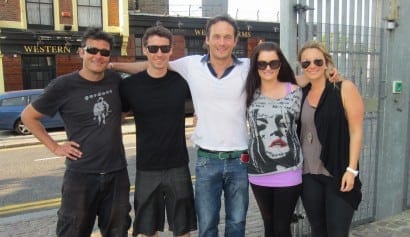 LIKE many great ideas, the latest up-and-coming label grabbing the attention of wine lovers everywhere all began over a simple glass of wine.

For calorie-conscious Nicole Lambe and Tanya Grant, it seemed like a simple idea: a great drop of wine without the calorie-laden guilt.

Little did they realize that their casual musings at their London local would soon come to fruition as the diet-friendly and delicious Golightly label, and that they themselves would be at the helm of the business making it happen.

Already, Golightly Wines is looking to be a hit.

Just ask businessmen Richard Reed, who has thrown down £50 000 in support of the four young entrepreneurs behind the label, Kiwis Logan Taylor and Steve Harrop, Canadian Tanya Grand and Australian Nicole Lambe. Not to mention Richard Branson has personally tasted Golightly’s produce and given it his seal of approval.

Not feeling the pressure of high expectations, Nicole Lambe has said the businessmen’s support has instead spurred on their motivation.

“It’s given us more credibility,” she told Australian Times.

“Meeting Richard Branson was incredibly inspiring and we are excited to bring innovation to the UK wine industry and challenge the status quo.”

A Golightly wine has 30 per cent less calories than a standard glass of the same varietal, thanks to a filtering process that reduces the alcohol content down to nine per cent.

In a society where many drink to get drunk, the Golightly team isn’t deterred from releasing a product that is lower in alcohol content than other wines.

“We are finding quite the opposite,” Nicole says.

“Market research is showing people are moving towards lighter wines due to tax breaks and more health benefits.”

The Golightly team first threw their brand into the spotlight on BBC3’s show Be Your Own Boss, where their quick wit and individual thinking helped the team stand out from the competition.

Proving a sense of humour can pay off, they draped Mr Reed’s office with a banner promoting their label and snagged his financial support.

The team has put in countless hours to deliver a product low in calories without skimping on quality.

“It has been a long and slow process,” Nicole told us.

“It was something we were doing on the side of our jobs, and it evolved in the evenings and over weekends brainstorming, doing market research, and product development.”

Nicole says the company would be sourcing produce based on its quality, rather than dealing exclusively with regions.

She has already hinted on what Golightly lovers can expect to hit their palate in the near future.

“We are planning on an Italian pinot gris and rose.

“We are not defined by any region, we want to find the best wines from the best regions that we can.”