An Aussie dwarf detonates in England

Some of my Pommy mates reckon I take things too far sometimes. I support Australia and anyone who is playing England. I don’t see why I have to relax my sporting beliefs just because I live here in the UK.

by Bon8
in Expat Life 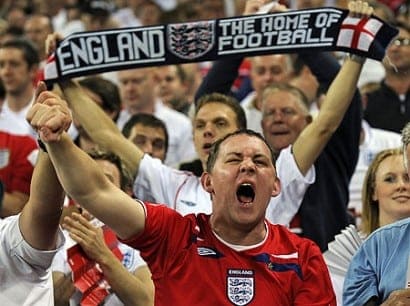 By Bon8
Some of my Pommy mates reckon I take things too far sometimes. I support Australia and anyone who is playing England. I don’t see why I have to relax my sporting beliefs just because I live here in the UK. If Webber comes fourth and Hamilton wins a F1 race, do we seek any comfort from that? Never! Do I support Pakistan against England? You bet I do.

I also think that we should take this opportunity to infiltrate their National Pride while we are here. It’s up to us to give as much support to Australia as possible even when England are not playing us. Guerrilla warfare and all that. I had been training for a long time when an opportunity came my way.

Conditions needed to be perfect before I could detonate and on this occasion it wasn’t immediately obvious that my mission had moved to code red. I was at a huge pub in the middle of Oxford. England were playing soccer against some Eastern European country, I don’t remember who, maybe Montenegro or someone. I was with a group of young English lads, friends of friends.

There were going to be casualties so this was excellent and it started to set the scene. The pub was packed, 500 blokes, we were stood somewhere near the middle about seven deep from the bar and the room was gridlocked. We passed money through and pints were passed back.

By half time no one had scored. That’s when I felt this could be it, my moment had arrived. I started to prepare for detonation. Another pint went down and I was ready to go. The crowd were nervous and restless, nobody had scored and they were starting to yell abuse at the screens. I was ground zero and my finger was on the button, not wearing any colors, neutral, totally under the radar, they had no idea.

It started deep within in my gut as my diaphragm forced upward and my throat expanded, I let out the biggest loudest ‘YYYYEEEEEEEEEESSSSSSSSSSS’ I could muster from my Aussie dwarf body. The boom reverberated off all four walls and a shockwave rippled through the crowd spreading from my now ex-mates like a yonnie landing in a pond. The crowd surged towards us but this only caused the blokes on the other side of the room to get pinned up against the wall. People were yelling, it was perfect! We were packed so tight no one was getting near me. It was like a fox fart in a hen battery. Confusion, panic and anger all mixed together. Where was the Montenegrian? Nobody saw him come in, how did he get in here?

I didn’t even spill my beer! My ex-mates went straight into defence mode. “It’s OK, he’s just a stupid Aussie,” they yelled. The crowd calmed. It was a perfect 10! The Poms got a couple of goals and won the game but that didn’t matter, I had upset all of them. We got out unscathed, however the young lads where damaged beyond repair and I was never invited out with them ever again. There had to be casualties…

So what do you think? Should we support the Poms against the rest of the world or keep our guard up against the old enemy at all times?

Have your say in the comments section below :