EXPAT FACTOR | Raised west of Sydney in the cloud-cloaked (and recently bush fire ravaged) villages of the Blue Mountains, Amy Firth is an Australian singer/songwriter living in London. She recently released her second EP on iTunes entitled 'Watchmaker's Daughter'. Amy is also the founder of The Vulnerability Project, which facilitates conversation around creativity and courage. During business hours she contracts as a Global Communication Executive, and of an evening she can be found with her guitar and loop pedal singing her heart out across many of London's leading music venues. 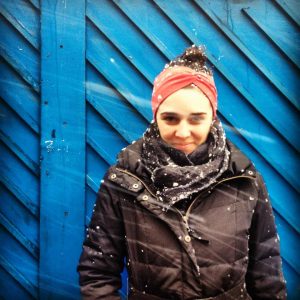 RAISED west of Sydney in the cloud-cloaked (and recently bush fire ravaged) villages of the Blue Mountains, Amy Firth is an Australian singer/songwriter living in London. She recently released her second EP on iTunes entitled ‘Watchmaker’s Daughter’. Amy is also the founder of The Vulnerability Project, which facilitates conversation around creativity and courage. During business hours she contracts as a Global Communication Executive, and of an evening she can be found with her guitar and loop pedal singing her heart out across many of London’s leading music venues.

It was February 2008 when I arrived in the UK. I was 24, heartbroken, and like many Aussies facing the quarter life crisis a plane ticket to London solved a lot of immediate problems. It was a clean slate and a promise of adventure.

In the first year I mostly travelled. I thrived on the freedom, which came with the anonymity of big foreign cities, especially the cultural melting pot of London.

My ticket was to return me to Australia after 12 months. Nearly six years later I’m still here. I don’t know where the time has gone. I was lucky enough to qualify for the Ancestry visa (my Mum’s parents are from Edinburgh) so I had five years up my sleeve but I NEVER thought I’d use it all, let alone get it renewed which I did in February this year. I now have residency until 2018 (don’t tell my Mum).

My highlights include when I won a year supply of cider in an unsigned talent competition. This was a BIG win for my thirsty little Stockwell share house of Uni friends.

Last year I played the London Thames festival — it was a (rare) glorious, sunny day and our stage was in the little park by the Oxo tower, Southbank. I loved being a part of such a magical festival.

Earlier this year I serenaded train passengers on the East London line for Sound Tracks Festival. It was a pretty unusual experience but a highlight none-the-less. Independently releasing my latest EP ‘Watchmaker’s Daughter’ was a big achievement. I had the support of some wonderful and talented people and I’m really proud of the end result.

I am in fact the daughter of a watchmaker. My Dad has been teaching watchmaking for 27 years and he is the only full time teacher of watchmaking left in Australia — a lone soldier in an on-going analogue versus digital battle, which has spanned the last three decades and seen the industry ebb and flow.

Growing up, our house was always filled with clocks and watches bonging and chiming at all hours of the day — it became a running joke to any visitor; despite each wall hosting a different clock none of them actually told the right time. Ultimately the album is a nod to my family, it is anchored in the love and strength I gain from them.

The English find it so hard to believe we Aussies would choose to swap our sunshine and beaches for this grey, old city. If I had a dollar for every time a Brit has asked why I moved here. But for those of us with ancestry in the UK, it feels like some sort of right of passage — returning to the Celtic roots. You also get a strong understanding of how enormous Australia is and how far away we are from the rest of the world. Getting on a train at Kings Cross Station and two hours later getting off in Paris, in Australia my Dad does the same train commute on a daily basis for work. It’s a humbling perspective shift. It’s what I love about travelling, and being based in London means making the most of Europe.

I find living away from my family and friends back in Australia gets harder each day and more complicated to justify. Missing weddings, funerals and births is heart breaking. But ultimately, my family and friends become a source of strength and a driving force to make the most of it whilst I am here, to make it count and make them proud. Skype is also an absolute Godsend and has allowed me to stay connected to my family — especially my niece and nephew who I miss like crazy. Even my Grandparents are all over Skype and social media, so it definitely closes the gap. I’m very grateful for that. I also totally miss the ocean, Cherry Ripes, Blue Mountain air, any kind of savoury cracker and my Mum’s lasagne.

I try to get back at least once a year. After a few white Christmas’ spent with wonderful friends in Glasgow, I returned to Sydney for Christmas in 2011 and quickly learnt the benefits of breaking up the gloomy UK winter with a couple of weeks of glorious Sydney summer. It’s not a cheap time of year to travel but when the sun’s on your back as you dive through that first wave at Freshy beach, it’s worth every cent.

I have a slight obsession with subterranean London — the underground rivers and tunnels, which still exist under London and somehow navigate the tube lines of course (or vice versa). It’s overwhelming to think about. It’s like we’re perched on honeycomb. There is a grate in the road on Ray St, Clerkenwell where you can hear the rushing water of the River Fleet underfoot. Sometimes on a low tide, you can also see the River Fleet feeding into the Thames from an outlet underneath Blackfriars Bridge. It’s totally dorky, but pretty amazing none-the-less.

When I need to get out of London, I love riding bikes around Seven Sisters Country Park. Searching for fresh oysters in Whitstable, flying kites by the sea in Sussex, visiting the lush greens of Devon, or the mighty gardens of Blenheim Palace are some of my favourite times passes. And if I really want to get away, I’ll take the gorgeous train ride up the coast to Edinburgh. Or Paris — get me on that Eurostar any day of the week!