A right old laugh at The Comedy Store in London

BRON IN THE DON | London is world renowned for its comedy scene, so when our resident adventurer went to tick #6 of her London Top 100 list, The Comedy Club, she got a barrelful of laughs and a whole lot more. 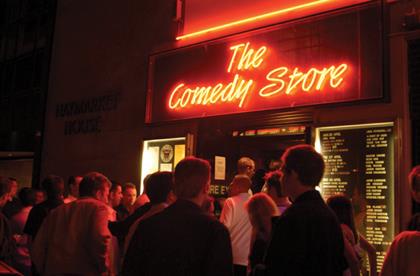 ONE of the things I love about London is that you are never short of a choice of entertainment. From people watching in the streets to London’s theatres and clubs, there is always someone to watch and something to do. Although, after ticking off #6 on my London Top 100 list – The Comedy Store – I have a new favourite!

Located right next to Piccadilly Circus, The Comedy Store has been providing laughs for 33 years and if the pictures on the walls of comedians who have performed there are anything to go by, it was a humble start for many of the world’s biggest comedians.

We went on a Thursday, which is a regular stand up show, and for a £20 ticket we were lucky enough to see the four billed comedians plus three extras who come down and do a five minute slot to test out new material. Our MC was hilarious and spent the right amount of time taking the piss out of members of the audience. Note to readers – don’t sit at the front unless you are prepared to be mocked for others enjoyment. Thankfully I was far enough away from the action that I was just one of the many people laughing!

Each comedian had their own style and all were seriously funny even when they were discussing usually boring topics like politics and finance. My favourite act of the night was Chris Martin (no, not the lead singer of Coldplay) — who was by far the funniest with his observational rants about life in London.

The Comedy Store also has a few other different types of evenings if you want something a bit different. If you’re a fan of ‘Good News Week’ then you may like ‘The Cutting Edge’ on every Tuesday. The show features six house comedians discussing topical subjects from news clippings and stories of interest.

If you think you are destined for stand up then you can even try it yourself at the King Gong on the last Monday of every month. Personally I prefer to leave that to the professionals but from previous experiences of open mike nights I can imagine that these nights could be amazingly hilarious or extremely awkward.

The venue itself is exactly how you expect a comedy club – intimate and dark except for the spotlight and a single mike on stage. If you get there before 7.30 you can treat yourself to happy hour behind the bar. I can recommend getting there a little while before the show to have a pint, grab one of their pizzas or burgers and score yourself a good seat.

During my time in London I’ve been to comedy a handful of times (even seeing Australia’s own Carl Barron in Hammersmith) and each time I’ve really enjoyed it. I’m not sure why I don’t do it more often or why it took me so long to tick this one off but I have to say I’m glad I did. By the end of the night my stomach hurt from laughing and I had a great night out. It is definitely one I would recommend and one I plan to do again!

239 scientists in 32 countries have written an open letter to the World Health Organisation (WHO) arguing there is mounting...

Five million residents of Melbourne and those from an adjoining shire go back into lockdown for six weeks.