A big thank you to Team Australia

It’s over. The summer Olympics is done and dusted. My Games Maker uniform is washed, folded away and sitting in storage. The atmosphere was jubilant, encouraging and supportive. We clapped and cheered until the last person crossed over the finish line. I felt a sense of solidarity with athletes, volunteers and spectators. 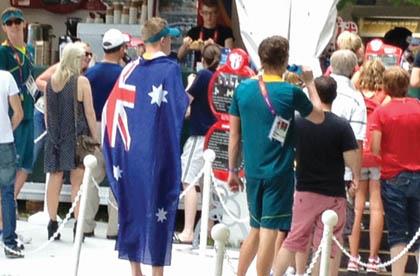 By Sepi Roshan
It’s over. The summer Olympics is done and dusted. My Games Maker uniform is washed, folded away and sitting in storage. The atmosphere was jubilant, encouraging and supportive. We clapped and cheered until the last person crossed over the finish line. I felt a sense of solidarity with athletes, volunteers and spectators.

So I was surprised with some of the comments leaking out of Australia: comments that have been less than supportive. Reports are that the official Olympic broadcaster, Channel Nine, asked silver medallists if they found their results “disappointing”. And a Channel Seven journalist confirmed that the media’s criticism is merely a representation of what the athletes, officials and Australian public believe. I couldn’t help but cringe. What happened to the Australia I knew? The “just have a go” and “good on ya mate” attitude? Are we only easy going when things go our way? Are we really in it, together?

Australia is a proud nation. We are proud of our sporting achievements and proud of our reputation in the world as being open, humorous and laid back people. We are part of a team that loves to win. Like most teams, whether they be nations, large organisations or families, when everything is going great guns, there is little to complain about. The event or project runs smoothly, we all agree on what needs to happen and are comfortable with the way forward.

When a team is accustomed to winning, expectations are invariably high. But sometimes the pressure, the effort made by other teams, and external factors are not taken into account. Instead, it is all too easy to blame, make excuses and deny accountability. This fosters resentment and disengagement. The cracks begin to show. When a team is functional and supportive – it is in times of adversity that it shines. The team understands that it is a time for reflection — to develop awareness, focus and execute new ways of doing. Members step in to take the reins or provide the support that will maximise results or minimise the loss. In these instances, persistence, patience and praise, is gold. And in the good times, great teams reap the rewards and share the glory.

It’s easy from the armchair or the outside to judge and criticise. It’s more helpful to support those who go out there and give it their all. Those who put in the hours of training and commitment. Those who are willing to take on the challenge for the team and aim to bring home the glory for us all.

On my last day volunteering for the London 2012 Olympics, I saw a bunch of young Aussie athletes, out to have some fun after having done their best to bring home gold. They were all proudly wearing their Official Green and Gold Olympic uniforms. They were proud to be part of the team. And I was proud of them for it.