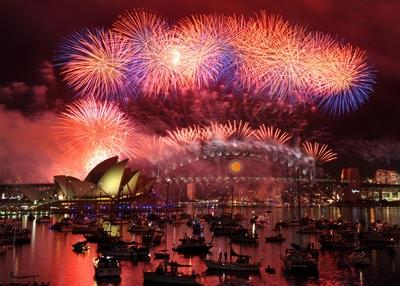 THE world famous New Year’s Eve fireworks display over Sydney has welcomed 2012 in with a bang.

1.5 million Sydneysiders clamoured on the city’s harbour foreshores to view one of the world’s most extravagant New Year’s fireworks spectacles, which was beamed live around the world. View the full gallery of photos of the Sydney New Year’s Eve fireworks show, here. (Photos by Tracey Nearmy, Mick Tsikas and AAP)

Landmarks such as the Sydney Opera House and Sydney Harbour Bridge were ablaze in a kaleidoscope of colour as fireworks exploded up and down the centre of the Australian city’s iconic harbour, to the tune of classic Aussie rock, heralding in 2012.

As Australia now parties on through till New Year’s Day dawn, revellers gather to see New Year’s Eve fireworks in London, New York, Paris and other cities around the world.