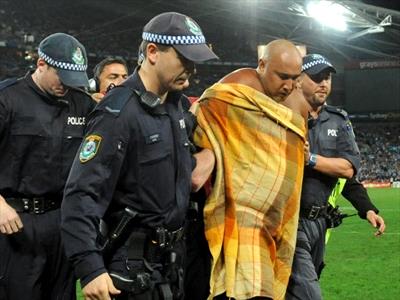 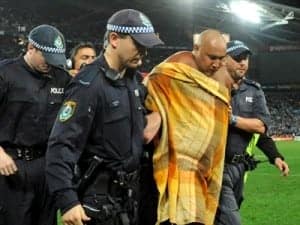 STATE of Origin streaker Wati Holmwood choked back tears as he apologised for his nude dash which has cost him two months in jail.

Holmwood had his three-month sentence cut on Tuesday, but will still serve time behind bars even though his lawyer told the Parramatta District Court that many in the community “would not want to see a streaker go to jail”.

He appealed against the jail term he received earlier this month for streaking 90 metres across Sydney’s ANZ Stadium during the NSW versus Queensland rugby league match in July in front of more than 83,000 spectators and seen by millions watching live on television.

The 33-year-old ran onto the field wearing nothing but joggers during the final minutes of the Origin decider.

Choking back tears, Holmwood simply replied “sorry” when asked by Mr Tuckey what he would say to members of the public who didn’t like what he did.

Holmwood, whom the court heard suffers depression and social anxiety, said his family must be “ashamed” and “upset” by his actions.

Mr Tuckey told the court Holmwood’s streak was part of a longstanding tradition in Australian sport.

“It was seen as a comedic act … It was a larrikin act,” Mr Tuckey said.

“Mr Holmwood is not the first person to streak at a football match or a cricket match.”

But Judge Martin Sides said a sentence of imprisonment was appropriate given Holmwood’s “poor compliance with conditional liberty in the past”.

Mr Sides on Tuesday ruled the Tempe man would not be fined for his Origin dash, but sentenced him to two months jail for breaching a bond over going nude at a Kurrajong campsite in June 2012.

Mr Sides also sentenced Holmwood to one month behind bars for the streak and one month for breaching a bond over a streak in 2011 at a Warriors vs Tigers NRL match at Leichhardt Oval.

After being sentenced to three months earlier this month, he was subsequently granted bail to appeal before being arrested last week for breaching a bail condition.

The sentences will be served concurrently, meaning Holmwood will be eligible for release from prison on 18 November. – AAP