For a moment or two, redemption was on the cards for Adam Scott at the US PGA Championship but a Rory McIlroy whirlwind roared through Kiawah Island to kill the fairytale. 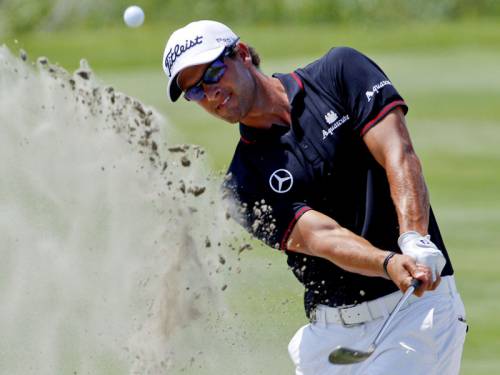 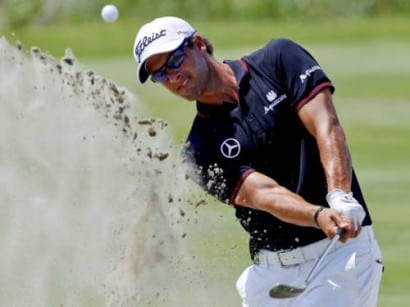 FOR a moment or two, redemption was on the cards for Adam Scott at the US PGA Championship but a Rory McIlroy whirlwind roared through Kiawah Island to kill the fairytale.

McIlroy turned a three-shot morning lead into an eight-shot annihilation of the field to claim his second major championship, the largest victory in PGA Championship history.

Starting a rain-delayed third round early on Sunday morning, Scott was just a shot off the lead and the smell of a sweet victory just weeks after his British Open meltdown was on the breeze.

Overnight rain had softened the course, the wind had died down and, seemingly, his shot at redemption was right in front of him.

But a poor chipping display and an uncooperative broomstick putter left the 32-year-old with two costly bogeys on par-fives, essentially putting him four back of McIlroy before the start of the final round.

From there, he was unable to make a charge and, after McIlroy’s final-round six-under 66 was matched against Scott’s last-round 73, he was a distant 11 shots back in a tie for 11th.

“I just never really got it going,” Scott said.

“Rory had it in his hands today, and put it out of everyone’s reach.”

Scott will try to stay positive, now having finished inside the top 25 in seven of his past eight majors, the top 10 in four of them, with two runner ups.

His worst major finish this year was T15 at the US Open but he says the year can’t be considered successful unless he makes a real run at the upcoming US Tour playoffs.

“I feel like I have played too good this year to not have a trophy somewhere so I’ll be determined in New York, Boston, Indy or Atlanta to get my name on one somewhere.

“But I think I have to take a lot of stock out of what I did this year in the majors and just try to improve a little bit.

“I just have to keep at it, keep practising and, to try to play against guys like Rory, I am going to have to play great.

“The game is right there and I have eight months to think about it and get ready for the next major.”

“I am playing well enough to be right up on top of leaderboards with a few holes to play but I need to make a few more putts and have some things go my way. It’s getting there,” Ogilvy said.