South Sydney recruit Matt King admits he is nervous about his return to the NRL, but is confident it won't go the same way as Matt Orford's 2011 campaign.

by Tim Martin
in at 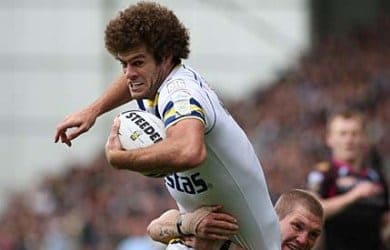 SOUTH SYDNEY recruit Matt King admits he is nervous about his return to the NRL, but is confident it won’t go the same way as Matt Orford’s 2011 campaign.

Orford’s signature was considered a major coup for Canberra at the start of this year, the former premiership-winning captain chased by several clubs after he cut ties with English club Bradford.

But after just one season in England the 33-year-old halfback struggled through six NRL games for Canberra and didn’t feature after round nine before he succumbed to a groin injury and was released from the final two years of his contract.

It is why King, a former teammate of Orford’s at Melbourne, is a little on edge as he approaches his first NRL pre-season since 2007.

Asked if he was nervous about returning to the NRL, King admitted: “I am. Four years is a long time.”

“I definitely haven’t had my feet up in the UK – I had four good seasons with Warrington – but coming back to the NRL is nerve racking.

“It’s without doubt the premier rugby league competition in the world and coming to such a great club with a strong history … nervous is probably a good way to put it.”

What King believes will set him apart from others who haven’t set the NRL alight after stints in the Super League is that he is still hungry for success in Australia.

“I’m a big believer in getting out what you put in,” he said.

“The more hard work I put in the easier the season will be.”

Whether that hard work will translate into adding to his nine NSW State of Origin appearances is another matter altogether.

“If I think I’m going to go out and play in the centres for NSW next year I am kidding myself,” King said.

“I’ve got a pretty tough job to knock off Greg Inglis and Dylan Farrell out of the centres here at Souths and that’s my main focus.

“But don’t get me wrong – if Ricky Stuart or anyone at the Blues office rang me to say ‘we’d like you to play’ I’d be in the first taxi over to the SFS.

“I’d be that happy. State of Origin was a very proud moment in my rugby league career but I’m not banking on ever playing for the Blues again.”