Preview of the Giants vs Redskins

THE 2013 NFC East is the division no team wants to win. With 6-5 records of Dallas and Philadelphia leading the way into December, the upcoming game between the Redskins and Giants is one that will keep the winner on life support for the playoffs, while the loser can start looking forward to 2014 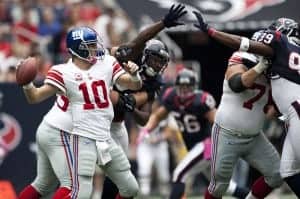 THE 2013 NFC East is the division no team wants to win.  With 6-5 records of Dallas and Philadelphia leading the way into December, the upcoming game between the Redskins and Giants is one that will keep the winner on life support for the playoffs, while the loser can start looking forward to 2014.  With this year’s Super Bowl being played outside in New York, the Giants had hoped to have a home-field advantage unlike any other team in the modern Super Bowl era.  However, unless they catch fire against the Redskins they will be sitting home watching the game like the rest of us.

The Giants, after a seemingly season-ending 0-6 start, have rebounded to win four of their last five and give the fans of “Big Blue” hope heading into December.  As Eli Manning has settled down in the pocket and stopped completing passes to opposing team’s players, the offense is clicking.  With Victor Cruz leading the way with over 60 receptions and 850 yards this season, it’s been the play of Reuben Randle that has surprised many.  With six touchdowns on just over 30 receptions, he’s becoming the go-to guy for Eli when the Giants need a score.  The running game, anemic all season, has rebounded nicely of late with Andre Brown and Brandon Jacobs starting to find their stride.

The Redskins, coming off a surprising 10-6 record and NFC East division title last season, have seen their hopes of building upon that success slowly dissipate as the season has gone on.  With inconsistent play from Robert Griffin III and a defense that has given up big plays all season, they find themselves essentially where they were at this point last season.  At 3-7 and last place in the division, they need to win out in order to have any chance not only at the division title, but a wild-card slot as well.  RG3, who started the season playing tentatively due to his knee injury, has found his game of late.  With 14 touchdown passes and a new-found ability to slide rather than take the tough hits, he’s put the Redskins on his back for the final month of the season.  The running game, with Alfred Morris closing in on a second consecutive 1,000 yard season, is always dangerous against a Giants defense that’s prone to being dominated by a power running game.  With Washington averaging over 155 yards per game on the ground, New York has its work cut out for it if it hopes to have anything to play for when the snow starts falling.

The December 1 game, being played at FedEx Field in Washington, is definitely a loser go home game for both teams.  Unless the division goes the way of the NFC West a few years back when Seattle won it at 7-9, the loser of this game is all but eliminated from playoff consideration.  As for who will win the game, the Redskins are early 2.5 point favorites in Vegas.  However, they still have their Monday night game against the 49’ers, and an injury to RG3 or another key player could change everything. The Giants, who have mastered late-season surges unlike any NFL team in history, know how to win late in the season when everything is on the line, and that can be seen in the odds at allpro.  The Redskins, however, had their success last season but still have young players in key positions on both sides of the ball, making them prone to crucial mistakes.  The only sure thing about the December 1 game is for the loser, it’s probably time to start thinking ahead to 2014.

Lelsie writes for many blogs, most business and sports.