Patrick Mahoney earned his third six-figure pot of his career as the Australia New Zealand Poker Tour (ANZPT) came to a close in Perth, however he is still lagging behind Australians, Salvatore Fazzino and David Lim in the overall standings. 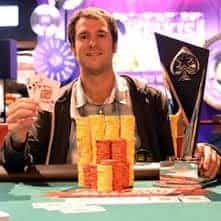 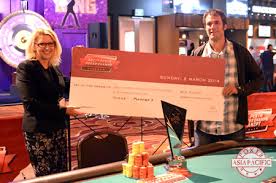 Patrick Mahoney earned his third six-figure pot of his career as the Australia New Zealand Poker Tour (ANZPT) came to a close in Perth, however he is still lagging behind Australians, Salvatore Fazzino and David Lim in the overall standings.

The U.S. poker player picked up $120,000 in the Main event, only the second win of his career in a tense final round with Australian Dean Blatt at the Crown Perth hotel on February 26th.

The final table featured seven Australians fighting for the chance to be crowned champion but couldn’t beat the man who won the pot on a full house. Mahoney has looked dangerous in the last year with the American finishing second in the Latin American Poker Tour (LAPT) in Panama, and 11th for $3,081 in the Australia Poker Hall of Fame Classic just a few weeks previous.

It hadn’t looked too likely to begin with either. Perth local Paul Murray started the day as chip leader with $1,206,000 compared to Mahoney’s $891,000 and Blatt’s $219,000 but a tough final table in which took over two hours to see anyone fall.

It was Justin Walch who fell first before the floodgates opened seeing Murray finish seventh before Matthew Rolfe battled bravely to finish sixth and Salvatore Fazzino managed a fifth place finish to take the lead in the ANZPT Player of the Year race.

The Minnesotan managed to draw level before going all in on a flop, eventually winning on a full house with three Jacks and two Kings.

However, it isn’t over just yet for Mahoney, as the ANZPT continues to roll on throughout Oceania. Josh Redhouse picked up the main prize in Sydney just a few days ago, whilst the tour will also visit Melbourne before finishing back in Auckland on November 23rd, and if Mahoney wants to aim for Player of the Year, he’ll have to put in more stellar performances.

But after bowing out early in Sydney, he is still some way from the top. It would be the first time an American has won the Player of the Year crown, with the only player to have won it from outside of the continent being Iori Yogo, who finished runner-up in ANZPT Melbourne and the Perth event just last year.

The recently appointed Full Tilt Poker Tour Ambassador, Tom Grigg is also yet to make a big impact on the Player of the Year race, but given his impressive history in the ANZPT Melbourne we might see him, and potentially Mahoney, fighting fellow Australians Fazzino and Lim before the season ends.