The countdown to Black Caviar's overseas odyssey has begun in earnest with the mare having a solid gallop at Caulfield on Monday, two days ahead of her departure for England.

by AAP
in at 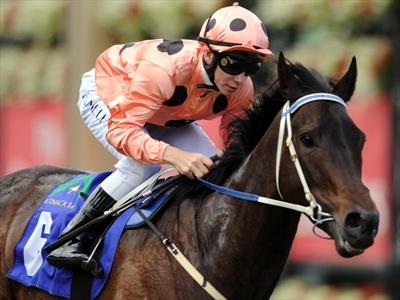 THE countdown to Black Caviar’s overseas odyssey has begun in earnest with the mare having a solid gallop at Caulfield on Monday, two days ahead of her departure for England.

Race jockey Luke Nolen put the unbeaten champion through her paces on a bleak Melbourne morning and was pleased with her work.

Black Caviar goes to England to contest the Diamond Jubilee Stakes at Royal Ascot with only English superstar Frankel rated above her on the international rankings.

“The weather was quite inclement.

“From my vantage point she worked nice and ran her last 600 (metres) quite stylishly under testing conditions on the track this morning.

“I was very happy with her.

Nolen said Black Caviar had proven her fitness at her last start in the Goodwood at Morphettville after a win in the Robert Sangster Stakes that was less impressive.

“She was a bit rusty on her first trip to Adelaide then back to her brilliant best in the Goodwood in her second go in Adelaide.

“She has stayed on or thereabouts the mark since.

“For me she’s the same old Black Caviar that we’ve all got very close to.”

Nolen said he thought the mare had the right demeanour to handle her first plane trip.

“She’s a pretty relaxed sort of animal,” he said.

“She’s not the best traveller but she’s done a fair bit of it and has got a lot better.”

Black Caviar is the dominant favourite for the Diamond Jubilee Stakes (1200m) on June 23.