AFL London: Was it the crowd, the weather, or just pure team grit that was most responsible for getting the Hawks over the line against last year's premiers? Meanwhile, ladies secure the minor premiership.

Saturday 9th July 2016 will go down in as one of the most successful days in the illustrious 26 year history of AFL London’s Wimbledon Hawks.

A year on from the club’s Premiers team finishing equal bottom of the ladder, the Social side crashing out in pre-lim finals, and the Ladies losing in the Grand Final to bitter rivals the Wandsworth Demons, all three teams have made finals at the same time; a first for the Wimbledon Hawks

Ladies Day at ‘The Nest’ is always a big attraction and this year was no different, being joined not just by the North London Lions, but the Reading Kangaroos and the Great Britain Swans as well. The day began with a nail-biting tie between the Hawks Social side and the Reading Kangaroos. It was quickly followed by a resounding 44 – 6 win for the Ladies, securing them as Minor Premiers and an unbeaten regular season. 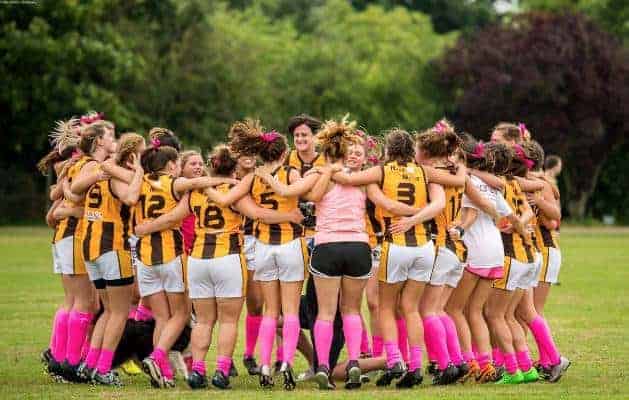 After a successful morning, it was left to the Premier side to take on the North London Lions, who had previously defeated them 9.11.65 – 3.14.32 in Round 2. A win would determine whether they’d progress straight through to finals, a loss would leave the race open until Round 10 against the London Swans.

The Hawks started quickly with some excellent groundwork by Damian Cribbin, Mitch Wedderburn, Jimmy Coghlan and Jordan Cahir working the ball from flank to flank in the midfield. It resulted in a great mark inside 50 by Great Britain Bulldog David Hastie to kick the first goal of the game.

A strong breeze continued to make it difficult for the Lions to get the ball into attacking areas and the Hawks kept coming. Newfound full forward Kayne Davies kicked his first of three goals and Jimmy Coghlan continued his impressive 2016 by scoring in the first quarter.

The Lions, missing their University of Birmingham GB players, struggled again in the second quarter. The Hawks handled the conditions perfectly, slowing the play down and not allowing the Lions any easy kicks into the forward 50. Continuing to press against the wind, their efforts paid off with the impressive Kayne Davies slotting his second and third goals of the game, the half time score reading 5.11.41 – 0.2.2 in the Hawks’ favour.

Similarly to Round 2, the Hawks kept the Lions very quiet in the first half but they came out firing in the third. A goal-for-goal quarter kept the scoreboard pressure on the Lions but with the wind in their favour leading in to the fourth, it was all to play for. James McKenzie kicked his first goal of the day after some impressive work at the contest. He went up with three Hawks and came down perfectly with the ball, giving the Wimbledon defense a few headaches.

The final quarter became a show of will and determination rather than skills. Players began to tire and the Lions looked to claw their way back into the game, whilst Wimbledon continued to hold on. The final nail in the coffin came midway through the quarter with the Hawks’ Will Kett coming out of halfback. Moving the ball with grace down the left flank, he nailed Luke Davison, enabling his first goal of the season at the top of the goal square.

Was it the crowd, the weather, or just pure team grit that was most responsible for getting the Hawks over the line against last year’s premiers? We might find out when the clubs go head-to-head again in the first round of finals footy in just two weeks’ time.