Given the chance to establish himself as a Test regular for Australia, opener Phil Hughes is hoping plenty of hard work pays off on the tour of Sri Lanka. 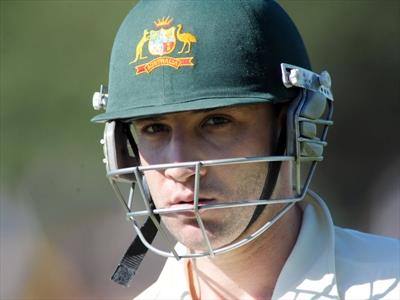 GIVEN the chance to establish himself as a Test regular for Australia, opener Phil Hughes is hoping plenty of hard work pays off on the tour of Sri Lanka.

Hughes was the biggest beneficiary of Cricket Australia’s controversial decision to axe veteran Simon Katich from their contract list in June, the move effectively giving him the chance to nail an openers spot for the foreseeable future.

But in a stop-start Test career that has gone from the joy of a blistering start to two disappointing Ashes campaigns, Hughes knows better than most that nothing is guaranteed.

The 22-year-old left-hander will have his first hit-out in the island nation from Thursday when Australia begin a three-day tour match against a Sri Lanka Board XI in Colombo ahead of a three-Test series starting on 31 August.

And while Hughes says he feels for his NSW teammate Katich over his dumping, his priority must be to ensure he makes the most of the opportunity handed to him.

“I was fortunate enough that my debut game for Australia was with Simon,” Hughes told reporters on Wednesday.

“I remember that and I always remember the time that Simon gave me back in NSW when I was only 17-18 going into the squad.

“I’ve always been supportive of Simon, but now I’m here and all I can focus on is playing the best possible cricket I can.

“That’s (Katich’s axing) a decision people have got to make and I’m not one of those. I’ve just got to control what I can control. (But) it was disappointing and I was feeling for Simon at the time.”

Hughes says after a disappointing Ashes campaign last summer, he underwent a heavy off-field workload to rediscover his form.

Since the Ashes, he’s finished the Sheffield Shield season with two centuries and two half-centuries and he scored two tons on the recent Australia A tour of Zimbabwe.

“It was good to finish off the season last year like I did,” Hughes said.

“It was a slow start to the year but to finish it off was a positive sign. I wanted to turn things around and happened to get some starts and go on with them at the back end of the season which was good.

“Went to Zimbabwe and that was a good tour for everyone. We were undefeated, Australia A, and to get runs under my belt there was a good confidence thing as well.”

Australia’s tour match begins at the P Sara Oval in Colombo from on Thursday.