Brett Lee was on the verge of equalling the Australian record for one-day international wickets before rain ruined the clash against Ireland in boggy Belfast. 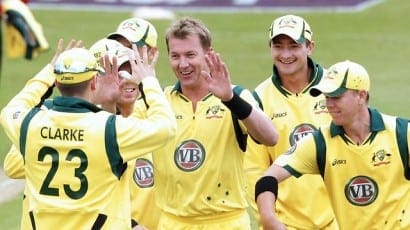 BRETT LEE was on the verge of equalling the Australian record for one-day international wickets before rain ruined the clash against Ireland in boggy Belfast.

Lee had figures of 2-10 off three overs with the home side 3-36 off 10.4 overs at the Civil Service Cricket Club when showers lashed the ground.

The veteran speedster made a brilliant start by bowling captain William Porterfield (0) and Ed Joyce (0) with the first and third deliveries of the rain-affected contest.

Australia have a final warm-up match against Essex in Chelmsford on Tuesday before the opening match of a five-game series against England starting on 29 June at Lord’s.

After Australia sent the home side in, Lee was spot on from his opening delivery with the ball coming back in and knocking back the Irish skipper’s off stump.

The New South Welshman had a confident lbw appeal turned down from the very next ball with the delivery looking to be sliding past Joyce’s leg stump.

However it was enough to throw Joyce, the left-hander playing inside the very next ball that crashed into his off stump.

Lee was replaced by Ben Hilfenhaus for the seventh over with captain Michael Clarke ensuring the Tasmanian found some rhythm before the weather turned.

Young quick Pat Cummins (1-11 off three overs) looked strong on his return to the national team in front of a crowd of just 6000 hardy souls.

It was the 19-year-old’s first outing for Australia since his storming performances in South Africa in November.

He collected the wicket of Paul Stirling (24) with Clarke taking a stunning one-handed diving catch to his right at first slip.

Niall O’Brien was unbeaten on 11 with Gary Wilson yet to get off the mark when play was halted just after midday (local time).