Australia are in control after a dominant display over Sri Lanka on the first day of the second Test in Kandy on Thursday. 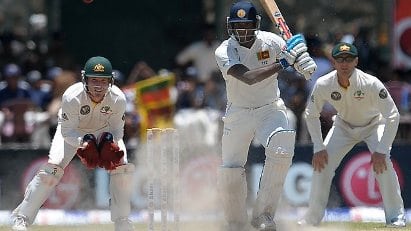 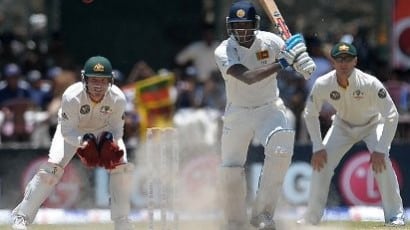 AUSTRALIA took firm control of the second Test against Sri Lanka after a dominant first day in Kandy on Thursday.

Despite losing the toss and being asked to field Australia rolled the hosts for just 174 and finished the day at 0-60, trailing by just 114 runs with 10 first innings wickets in hand.

It means Australia is in the box seat to claim victory and an unbeatable 2-0 lead in the three-match series, in what would be their first Test series win since defeating New Zealand in March last year.

Ryan Harris (3-38) was the pick of Australia’s bowlers but the day was particularly notable for Michael Hussey, who claimed just the third wicket of his 61-Test career when he dismissed Kumar Sangakkara (48) after the Sri Lanka star had put on a 52-run partnership with Angelo Mathews (58) following the lunch break.

Sangakkara appeared stunned after he chipped one of Hussey’s innocuous medium-pacers straight to Phillip Hughes and the 36-year-old Hussey was also in a state of shock.

“I couldn’t believe Michael Clarke was going to give me a bowl,” the West Australian told reporters.

“When he said that he did sort of say he wouldn’t mind giving me a couple of overs because with a little bit less pace they might be able to chip one out to cover and obviously he was spot on the money. Particularly about the lack of pace and chipping it up to cover.

“I was pretty shocked but obviously it was a very valuable wicket for the team and I’ll take it any day of the week because he’s obviously one of the of the best players in the world and they had a pretty good partnership going.”

Sri Lanka’s day started badly, with left-arm spinner Rangana Herath ruled out with a finger injury while Ajantha Mendis could be in doubt for the remainder of the series due to a back complaint.

That meant off-spinner Suraj Randiv retained his spot while leg-spinner Seekkuge Prasanna was handed a Test debut in place of Herath.

After winning the toss, Sri Lanka then lost five wickets in the first session with Hussey also snaring a brilliant one-handed diving catch in the gully to remove dangerman Mahela Jayawardene (4).

“It’s always great to hang on to a spectacular catch but I think more importantly it was the wicket of Jayawardene who was a big thorn in our side down in Galle,” Hussey said.

“I guess I was pretty lucky today that the two probably key wickets were in my hands.”

Sri Lanka captain Tillakaratne Dilshan, whose team is rumoured to be looking at hiring psychologist Rudi Webster after series, admitted the day’s display had not been good enough.

“They bowled really well in the start but our batsmen didn’t bat well,” Dilshan said.

Shaun Marsh, making his own debut for Australia, enjoyed a special moment before the match when his father Geoff – a former Test opener – presented him with his Baggy Green cap.

Marsh becomes Australian Test player No.422 – his father is No.333 – and the pair are the first father/son combination to play for Australia since 1912.