He did't even realise until half time.

by Alexis Haden
in Sport 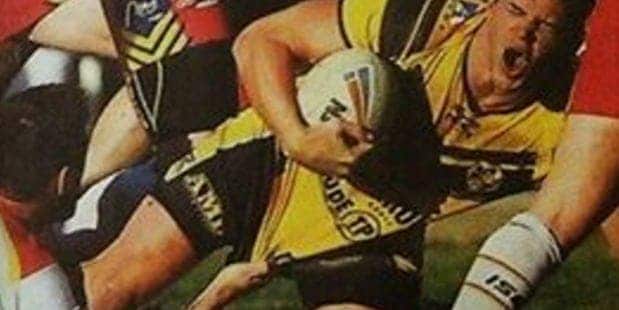 An Australian rugby league player, Haydn Peacock almost had his penis torn off while playing for AS Carcassonne in France last month.

The 23-year old was tackled in a match against St Esteve Catalans Dragons and a photograph even caught the moment on camera. Peacock, however kept on playing until half-time, without even realising how badly injured he was.

Not the best reason to be on the front page of the paper this morning. #rugbyleague is definitely not a sport I recommend. 11 stitches later for the little fella but she’ll be right

“When we played UTC the other week their centre pretty much ripped my d*ck off,” Peacock explained on the website French Footy.

“He made a tackle by reaching out and grabbing my d*ck. Have you seen the photo? It’s a classic. They put it on the front page of the paper.

“I took the ball off the scrum and made a half break, and their centre has come across from the inside and reached out in a last-ditch effort and has got a hold of my d*ck with one hand and pulled me down.”

In typical Aussie fashion, Peacock just got on with in the next game.

Peacock is not the first player to have his bits injured. In 2012, Paul Wood had to have one of his testicles removed after he was kneed in the groin in a Super League match for Warrington Wolves. His testicle ruptured when he was hit but, like Peacock, he carried on playing and only realised later how bad the injury was.