North London on the prowl for finals prey after demolishing Putney by 99 points. Plus FULL RESULTS FROM ALL DIVISIONS.

The Lions defeated the Magpies in atrocious conditions at Bounds Green, romping to an important 109-point win to well and truly cement their place in the 2016 Finals race.

With lack of numbers and a forfeit in the Social division, the Magpies started out on the back foot from the get go.  Heavy patches of torrential rain were matched with brief moments of scorching sunshine from the opening bounce, making the contest a hard slog.

The home side were the ones able to play the best wet weather footy, laying incredible tackles and acquiring an abundance of scoring shots despite the thick mud.

The Lions sprinted out of the blocks, piling on six goals in the first term with leading goal kicker for the match, Tim Fisher, kicking two of his three while Jack Coughlan also bagged himself two.

Despite leading from start to finish, the tempers were flaring and fight was present. With a few melees and aggressive tackling, you wouldn’t have guessed the margin was so significant. 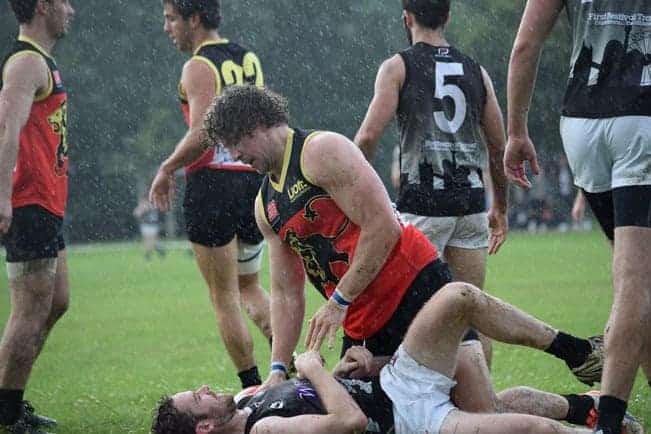 The ‘Pies were strong in the midfield but were unable to crack into their forward fifty time and time again. Putney players Charlie Hammond and Miles Watson led their team, being ever present and hard working. While both of them were all over the ground, Hammond kicked the ‘Pies solitary goal and Watson was strong up in the ruck. The Pies had some patches where they had a little bit of momentum, but by all around they needed to improve on their consistency.

Michael Sharp, newly selected GB Bulldog and University of Birmingham player, made a huge impact on the game with his outstanding work on the wing as well as adding two majors to the scoreboard. The Bulldog consistently went for a second and third attempt whilst always keeping on his feet, proving to be a great recruit for the upcoming AFL Europe Championship for Great Britain in August.

Meanwhile, fellow Lions Colton Ward and Jay Pitto were exceptional in the tackling department and teammate Mitchell Dole kicked a couple of crafty goals, keeping the boys excited. North London ruckman James McKenzie was fantastic in dropping into the hole and cutting off forward line delivery, as well giving his midfielders first use of the ball, and dominated the hit-out count. The entire Lions backline held strong together and only allowed for three scoring shots for the match. 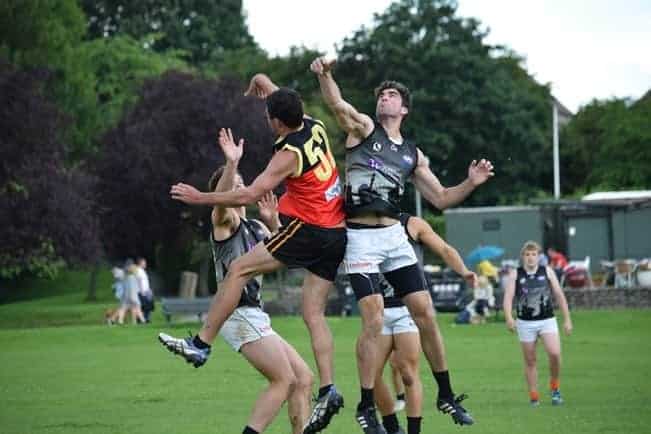 The extreme and swinging weather conditions didn’t phase the Lions who are looking stronger and stronger as the finals creep nearer. Up against the Demons this weekend at home will be a good measurement of their finals positioning.