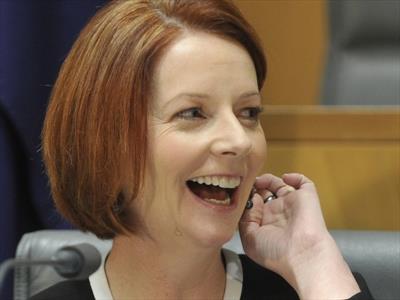 1. GILLARD PREVAILS. Julia Gillard comfortably saw off a leadership challenge from the man she deposed as prime minister, defeating Kevin Rudd 71-31 in a Labor caucus ballot. Her minority government survived despite the resignation of Liberal renegade Peter Slipper as speaker over sexual harassment allegations and the enforced move of embattled former union boss Craig Thomson to the crossbenches. She succeeded in passing controversial legislation introducing both a carbon price and a new mining tax, survived a cabinet revolt over Palestine’s UN status and flatly denied any wrongdoing as a young industrial lawyer in setting up a union slush fund for a former boyfriend. Australia’s first female prime minister proved less unpopular in the polls than Opposition Leader Tony Abbott, whom she painted as a sexist and misogynist. But her biggest challenge remains, as an election year looms with her unpopular government still mired in election-losing territory.

2. ECONOMIC STRENGTH. Australia’s economy remained one of the best-performing in the developed world, having sidestepped the GFC, which crash-tackled many other nations. The economy grew by 3.7 per cent in the year to June, half as fast as China’s, easing back to 3.1 per cent later in the year. The resources boom remained the driving force. Although commodity prices fell by 20 per cent against their peak in mid-2011, cutting sharply into revenues, the investment peak is yet to come. The Reserve Bank cut the cash rate by 1.25 percentage points during the year to three per cent to head off a slowdown, though commercial banks did not pass on the cuts in full to homeowners with mortgages. Unemployment remained at a very low 5.2 per cent. The strong Aussie dollar hit 108 US cents before settling back around 104, still above dollar-for-dollar parity. It also hit historic highs of Euro 86 cents, and remained above 80.

3. ASIAN POWER. Australia flexed its muscles as an Asia-Pacific power, winning a UN Security Council seat and the right to host the powerful G20 leaders summit in 2014. Barack Obama’s re-election as US president maintained the momentum of America’s pivot to Asia, which includes rotating US troops through Darwin, and visiting Secretary of State Hillary Clinton hosed down suggestions that the US military alliance could harm Australia’s relations with key trading giant China. Australia welcomed Prince Charles and his wife Camilla in the Queen’s diamond jubilee year, but a Gillard government white paper made it clear Australia’s future lies in Asia.

4. WAR LOSSES. The death toll in Australia’s 10-year engagement in Afghanistan jumped to 39, with half of those occurring in the past two years. The deaths of five soldiers in one day was the nation’s biggest combat loss in a 24-hour period since the Battle of Long Tan in Vietnam 46 years earlier. Australian combat troops are to quit Afghanistan in 2014, and for many Australians the end can’t come quickly enough.

5. RINEHART’S RISE. The resources boom propelled mining heiress Gina Rinehart to a $29 billion fortune, making her not only Australia’s but the world’s richest woman. Her wealth ballooned by an unparalleled $18.87 billion in one year, according to BRW magazine’s annual rich list, meaning she acquired a million dollars every half hour, though falling commodity prices have since pared back her fortune. She bought 13 per cent of Fairfax Media, agitated for a board seat, and became embroiled in a so-called “class war” with federal Treasurer Wayne Swan. She was also at the centre of a bitter family squabble, failing in a bid to dismiss court proceedings after her three eldest children sought to oust her as trustee of the multi-million dollar family trust.

6. ASSANGE’S ASYLUM. WikiLeaks founder Julian Assange has been holed up in Ecuador’s London embassy since mid-August after being granted asylum in his bid to avoid extradition to Sweden, where he faces questioning over alleged rape and sexual assault. The stalemate came after Britain refused to allow the 41-year-old Australian safe passage out of the country. Assange denies the allegations against him and claims he could eventually be passed from Sweden to the United States for prosecution over his website’s publication of hundreds of thousands of classified US documents.

7. CHAMBERLAINS VINDICATED. Thirty-two years, four inquests and one royal commission after Lindy Chamberlain screamed “A dingo has got my baby” in a Northern Territory camping ground, one of Australia’s most infamous travesties of justice was officially corrected on a death certificate. A dingo killed nine-month-old Azaria after all, but Lindy spent three years behind bars before she was exonerated, and gave birth to her fourth child in jail. Her former husband Michael said: “If you know you are right, never give up … even when it seems to be a mission impossible.”

8. PATEL’S RETRIAL. Former Bundaberg surgeon Jayant Patel will be tried again early next year for the manslaughter of 75-year-old Mervyn Morris after the High Court ruled there had been a miscarriage of justice during his 2010 trial. Patel, who was released on bail, had been serving a seven-year jail sentence. The Indian-born Patel will also be retried separately for the manslaughter of 77-year-old Gerry Kemps and 46-year-old James Phillips, and for causing grievous bodily harm to 62-year-old Ian Rodney Vowles. The charges relate to his time at Bundaberg Base Hospital between 2003 and 2005.

9. ASYLUM SEEKERS. Prime Minister Julia Gillard’s answer to the hot-button political issue of asylum seekers was to return to a Howard-era Pacific Solution to deter boat people. More than 7,000, however, ventured onto the high seas even after she announced the resumption of offshore processing in Nauru and Manus Island, PNG. The Manus base was contentious because island residents claimed they were not being adequately compensated. And a damning Amnesty International report accused the federal government of inflicting a “crisis of cruelty” on asylum seekers detained on Nauru, describing the island’s camp as “completely unacceptable”.

10. ABUSE INQUIRY. Prime Minister Julia Gillard’s decision to establish a royal commission into child sexual abuse received near-universal support – a record 95 per cent backing in one poll, and the approval of all political parties, state and federal. But Sydney’s Catholic Archbishop George Pell said priests hearing admissions of pedophilia in the confession box should not be required to report it to authorities, a stance sharply at odds with the views of other Catholics, including Opposition Leader Tony Abbott and NSW Premier Barry O’Farrell. The royal commission will enquire not only into churches but all institutions, including state-run bodies, sporting clubs and organisations like the Scouts.