The far-right may think they own ‘nationalism’, but we can reclaim it as a force for good

OPINION AND ANALYSIS: The weekend rally on St Kilda beach, organised by far-right activist Neil Erikson, reminds us nationalism is the territory of fringe groups who hold bigoted views, particularly towards people who aren’t “white”. 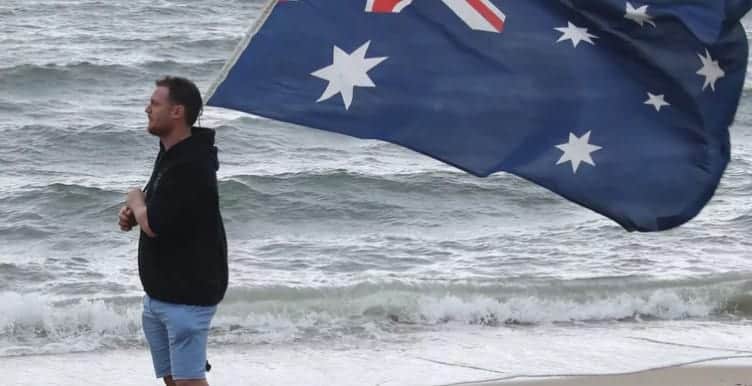 We see the word “nationalism” as problematic. The weekend rally on St Kilda beach, organised by far-right activist Neil Erikson, reminds us nationalism is the territory of fringe groups who hold bigoted views, particularly towards people who aren’t “white”.

Identification with one’s own nation and support for its interests, especially to the exclusion or detriment of the interests of other nations.

We often think about nationalism in these terms. To be a nationalist means loving your own country in a strident manner while being fairly suspicious of people in other countries.

The global rise of populism and the solid electoral gains made by far-right and xenophobic parties across the Western world seems to have underscored the association between nationalism and the base and aggressive in human politics.

Yet, is it possible to simply turf out nationalism? Beyond its ideological connotations, nationalism rests on one of the most important elements shaping modern social life: we live in a world of nations.

We often under-estimate the power of nationalism in contemporary societies, as well as the variety of roles – not all conservative and problematic — it plays as a social and political force.

How multicultural groups use nationalism

Australian nationalism may have come to be associated with right-wing groups such as Reclaim Australia. But multicultural communities often publicly frame their distinctive identities in terms of national belonging and participation in the life of the nation.

They may not always march under the flag — though sometimes they do — but they regularly appeal to a national “we”. My research has explored how multicultural communities in Australia invoke the national language of their new country while advocating for their unique needs and cultural differences.

Irrespective of our personal politics, we participate in the idea of nationalism when we identify ourselves as “Australian”, talk about “United States” politics or expect to encounter cultural differences at the airport.

Some say we should use the word “patriotism” as a softer alternative. While still guided by a love and loyalty for country, a patriot’s passions are tempered by a “spirit of cooperation”.

Others say we should throw out any loyalty for country altogether, becoming instead cosmopolitanists who celebrate a borderless common humanity, or localists who prioritise the interests of their immediate community.

But nationalism is not just a political ideology that demands the needs of the national group sit above those of outsiders. National loyalty doesn’t necessarily supersede any others while national interests trump all else. Nationalism is intertwined with the very idea of there being nations in the first place.

This is such a taken-for-granted reality, we often understand nations as stretching back to time immemorial when, in fact, they are only a couple of hundred years old – and most are far younger.

Modern nationalism has its roots in 18th century European thought and found its most powerful expressions in the French and American Revolutions. But it is only since the end of the second world war that the world transformed from one of empire and dominion to ostensibly independent nation-states.

Nations, of course, are real in the sense that the nation-state continues to organise everything from schools, markets, bureaucracies and military, to the structures of citizenship. But the idea of the nation as a political community united by a distinctive culture is an imaginary construct.

The notion of nation confers an idea of horizontal membership and solidarity (rich or poor, we are all Australian) belied by vigorous and often violent struggles that take place under its rubric – as well as a selective forgetting of history.

Yet, their ubiquity in the modern social imagination means nations matter.

Nations matter because they provide identity, community and a sense of belonging for many people. In a world made smaller by globalisation, this is especially important to counter the sense of rootlessness and displacement.

Nations also matter precisely because of the things they promise yet fail to deliver. It isn’t possible to fulfil the national ideal of horizontal membership (Australia’s richest woman Gina Rinehart will never be neighbour to the average Joe), but the aspiration for equal participation and compulsion towards solidarity can make for powerful democratic fodder.

Historically, nationalism and the idea of popular rule was essential to the movement towards democracy. Today, the idea of belonging to a nation continues to fashion social solidarity across differences, encourages mutual responsibility among citizens and allows people to commit to or participate in public institutions and projects.

All this compels a more nuanced understanding of the roles and functions of nationalism in contemporary society. Rather than patronise “ordinary people” for their nationalist attachments, we would be well served to think about the democratic and progressive potential of nationalism.

The Trumps and Brexiters of the world are most certainly nationalists in the sense they organise around a “nation first” idea. But the political meanings of nationalism are not set in stone. Nationalism can take progressive forms that prioritise connectedness and equity rather than racism or white supremacy.

Nationalism can be used to fight colonial domination as much as enforce it.

Most importantly, nationalism needs to be understood as a driving ideology shaping our modern world. Grasping this is fundamental to understanding national community as more a political aspiration than a cultural given; something to achieve rather than something already fixed.

And this, in turn, is fundamental to refusing the claims of the far-right who would like to claim the nation for themselves.

TOP IMAGE: Nationalism is defined as identification with one’s own nation and support for its interests. (DAVID CROSLING/AAP Image/The Conversation)