NSW blaze out of control as Aussie bushfire threat continues

The NSW bushfire crisis is set to continue as more extreme weather hits the state and firefights continue to battle the worst blaze in decades. 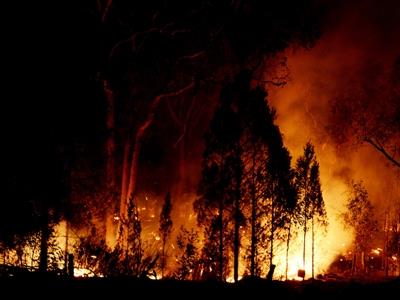 EXTREME weather is tipped to create more high bushfire danger this week, as firefighters continue to battle a monster blaze in NSW’s northwest.

On Tuesday afternoon around 800 fire firefighters were battling 100 bushfires across NSW, 25 of them uncontained, with more than 500,000 hectares of the state now burnt in 11 days.

The worst of the fires, at the Warrumbungle National Park near Coonabarabran in the state’s northwest, has so far burnt through 40,000 hectares, destroyed at least 40 properties, and remains out of control, the NSW Rural Fire Service (RFS) advises.

Around 155 firefighters from greater Sydney, the Hunter region and other parts of the north coast arrived on the scene on Tuesday so they could rotate crews to manage fatigue, with some firefighters working 36-hour shifts.

About 180 firefighters were fighting the fire at 4pm (AEDT), the RFS said.

Acting Premier Andrew Stoner, who toured fire-ravaged areas around Coonabarabran on Tuesday, said the blaze had caught everyone by surprise.

“It’s absolutely obvious that this was a extreme fire and that the ferocity and the rapidity of this fire caught everyone pretty much unawares,” Mr Stoner told reporters.

“It’s absolutely amazing that there hasn’t been more property damage as a result of this fire.”

He predicted this summer’s “onslaught of fire” to continue this week, with temperatures set to soar again over 40C on Thursday and Friday in much of NSW, including the central west.

“Fires are still burning out there. We’re expecting hot weather again at the end of the week,” Mr Stoner said.

“We continue to call on our firefighters to maintain the front line against this seeming onslaught of fire during this season.”

Authorities said there was a chance northerly winds could see the Warrumbungle fire head back towards Coonabarabran and that they were targeting strategic areas of the firefront “to ensure that we are prepared for that eventuality”.

Commissioner Shane Fitzsimmons said the fire was one of the worst the state had seen.

“Undoubtedly you saw firefighters and the community through Coonabarabran here face one of the most, ferocious, intense, fast-moving bushfires that we have seen in decades,” he told reporters after surveying the site.

Brothers Steve and Christian Munge said their parents had lost everything when the blaze ripped through their Baradine home.

“I have seen some big fires but the intensity of the speed (of) which it travelled really shocked me,” Christian told AAP.

Dawn Keirle and her husband Dave returned to their home on Timor Road near Coonabarabran to find it reduced to a black shell.

Ms Keirle said she was focused on what had survived rather than what was lost.

“Our sheep have survived so have our two alpacas,” she told AAP.

The Australian National University (ANU), which runs the fire-damaged Siding Spring Observatory, also revealed on Tuesday that staff at the facility were among those who lost homes in the most destructive bushfire in the state for a decade.

The fire swept by the hilltop observatory near Coonabarabran on Sunday.

The RFS said other major fires were a blaze near Redbank Trail 35km north east of Coonabarabran, which has so far burnt more than 620 hectares.

In the state’s south, fire authorities said a fire 30km north of Nimmitabel in the Kybeyan has burnt through more than 12,185 hectares, but is being controlled. – AAP