Prime Minister Gillard urges Europe to implement expansionary policies to rescue itself from the debt crisis, pointing to Australia as a model of growth with fiscal discipline. 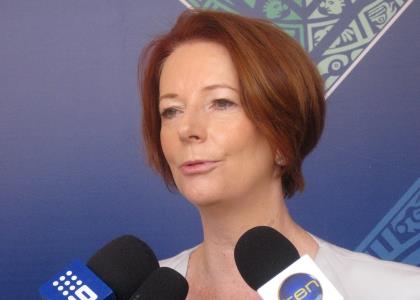 AHEAD of this week’s G20 meeting in Mexico, Prime Minister Julia Gillard boasted about the Australian economy and urged European leaders to follow its example.

Ms Gillard was speaking to business leaders on Sunday (local time) at a B20 forum being held on the sidelines of the G20 summit, due to commence Monday.

The prime minister said while some countries were opting to spend their way out of the problem, others were facing austerity measures which had angered voters and threatened stability.

“A more sophisticated understanding of the connection between economic growth and fiscal discipline is emerging, and not before time,” she said.

Ms Gillard offered Australia, which has an expanding economy and is on track to produce a $1.5 billion surplus in 2012/13, as a model to achieve that goal.

Earlier, on arriving in Mexico, Ms Gillard told reporters, “Whilst the Australian economy is strong, this meeting of the G20 comes at a time when yet again all eyes are on Greece and we see a faltering economy in Europe.”

“What happens in Europe does matter to the economy of Australia because Europe is the single biggest economic zone in the world.” she said.

The prime minister added she would be telling her European counterparts that they need to work on further banking and fiscal integration, but that better integration was not enough.

“Ultimately the answer to this economic crisis is growth. It is growth that enables you to keep jobs and investment … and put your budget on a sustainable footing,” she said.

In Canberra, Treasurer Wayne Swan backed Ms Gillard’s messages, saying the problems in Europe could not be fixed by one summit or one election in Greece.

“Only by moving forward with fiscal and political integration can Europe be saved,” he said.

Ms Gillard said she would be pushing for each G20 nation to commit to specific action plans on jobs and growth and also be speaking out against trade protectionism.

She also said she wanted to see other nations make renewed commitments to the International Monetary Fund, as Australia had done at last year’s G20 summit in Cannes.

The prime minister declined to comment on the latest Galaxy poll, which showed the coalition holding an election-winning lead.

Ms Gillard is in the Mexican resort city of Los Cabos for the Group of 20 leaders’ summit, which Australia will host in 2014 at a yet to be named venue.

Prime Minister Julia Gillard also warned world leaders of the “human cost” of not taking action to shore up the European banking system and allow the region’s major economies to drive growth and investment.

Arriving amid a security lockdown on Sunday, the Australian prime minister told business leaders at the B20 forum, being held on the sidelines of the G20, there were at least 200 million jobless people worldwide and this was weakening growth in many countries.

“The scale of the human cost tells us that a return to growth is urgently required,” she said, while warning that the risks were intensifying because the impact of the sovereign debt crisis in Europe was spreading.

G20 leaders will spend much of the summit discussing Greece, which is likely to be governed by a coalition headed by the pro-bailout conservative New Democracy party, following weekend elections.

With the International Monetary Fund (IMF) estimating emerging economies contributed more than three quarters of global growth in 2011, and that the trend would continue, the leaders of China and India agreed the summit must deliver.

“(I) hope the G20 will come up with constructive proposals to get the world out of the crisis.”

“Growth in major economies is sluggish,” he said.

“It is becoming more difficult for countries to co-ordinate their macroeconomic policies.

“Markets can manage and hedge risks that they are generally aware of,” he said.

“The danger we’re creating is that the pattern of policymaking is increasing uncertainty.”

Road travel around Los Cabos on Sunday, including Ms Gillard’s trip from the airport to the resort, was delayed after a speeding police bus went over a cliff and onto the beach, injuring 15 officers.

On Sunday night, helicopters patrolled the skies while beaches were closed and soldiers and federal police guarded the main roads to the ritzy resort hotels hosting the world leaders.

IMAGE: Prime Minister Julia Gillard addresses a media conference ahead of the Group of 20 leaders’ summit in Los Cabos, Mexico, Sunday, June 17, 2012. The G20 Summit, which starts on Monday, comes as all eyes are on the election results in Greece. (AAP Image/Paul Osborne)