Australia has hailed Burma's by-elections as a big step forward and now looks likely to further ease its sanctions against the troubled nation. 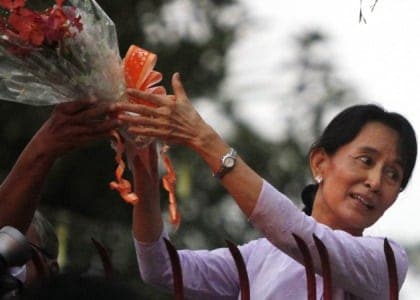 The veteran activist’s election to political office – after spending most of the last 22 years under house arrest – is the most dramatic signal yet that Burma is serious about democratic reform after decades of strict military rule.

“Some irregularities have been alleged but nothing that would have affected the outcome,” Senator Carr told reporters on Canberra on Monday.

With many repressive laws still on the books and political prisoners still behind bars, the country still had a long way to go, Senator Carr said.

But he signalled that the government was planning to further ease its sanctions.

“We’ve got to see that there is a promise of continuing reform as well as some authentication that these by-elections have been well and truly robust,” he said.

“We want to go far enough to encourage the government to continue to move and roll out democratisation, but we don’t want to remove all the pressure to do the good work.”

Asked whether he would also consider finally recognising Burma’s official name change to Myanmar, he said, “I’m open-minded about that.”

“It shows the people of Burma share the aspiration of people the world over – they want to live in freedom and in peace,” Ms Bishop told AAP.

But she said sanctions decisions should be taken in consultation with other sanctioning nations like the United States.

But she cautioned Senator Carr against easing sanctions too soon.

Burma’s government has surprised even its harshest critics with a string of bold reforms over the past year.

Suu Kyi was freed from house arrest in November 2010.

A nominally civilian government replaced the long-ruling military junta in March last year but the parliament is still composed mainly of military figures.