MUSIC FROM THE MOTHERLAND: Guy Sebastian gets Twitter rage, The Cat Empire are coming back to London, new Avalanches record on its way and AC/DC set for a 40th like no other. 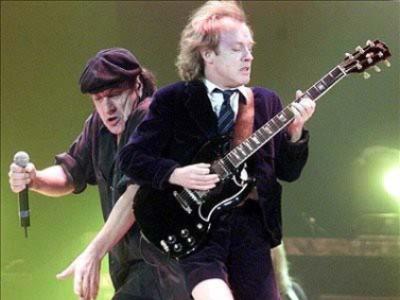 What’s your favourite Aussie album?
Triple J loves a Hottest 100 list. Annually they roll out the ever popular Hottest 100 best songs of the previous year, as voted by listeners. This week they’ve launched the hunt for the best Australian album of all time, with folks having until the end of June to cast their vote.

Voters will be able to pick their top ten Aussie albums of all time, with the opportunity to win a ‘green and golden’ ticket of free entry to any Triple J supported Australian gig for the next 12 months.

The rules are simple: It must be an original, full-length album (no greatest hits or compilations), and the artist must be Australian. In true Aussie style, Triple J has adopted, as we like to call it ‘the Russell Crowe’ clause. Artists not born in Australia but who live or have lived in Australia are eligible for entry (no doubt giving Forty Odd Foot of Grunt a serious look in).

We won’t be betting the house on Russ’s band just yet with classics like AC/DC, INXS, Powderfinger and perhaps even John Farnham looking for a number one finish. Leading up to the announcement Triple J has asked scores of musicians and industry gurus to pick their top ten albums. An early leader and top five favourite has been DJ/sample loving duo the Avalanches with their 2001 hit Since I Left You.

It’s really ready, we promise, this time for sure
Speaking of the Avalanches and their debut album which left us all singing ‘‘That boy needs therapy” then desperately waiting for a follow up, the bands record company Modular has confirmed the second album 10 years on is finally complete.

Over the years there has been talk, promise and rumour of a new album, with Avalanche fans left heartbroken and the music press looking silly when nothing eventuated. With their music being a weird collection of samples and tunes which take forever to mix, we know there could be further delays.

Therefore we won’t hold our breath just yet but hopefully they’ll hit us with something soon so we can croon along to some more weird yet funky sounding songs.

Acca Dacca gearing up for their 40th
AC/DC frontman Brian Johnson has hinted that there may be very special celebrations when the pioneers of Australian hard rock celebrate their 40th anniversary in 2013. Are we talking cake, balloons and a bottle of champagne? Not likely!

Johnson has said the band will be meeting shortly to discuss plans for a new album. This will go nicely alongside their 19 others and their 200 million record sales worldwide.

More importantly though, what usually comes with a new record? That’s right, a world tour. Their last tour ‘Black Ice’ was a juggernaut of massive proportions. They even had their own steam train on stage. Now that’s rock and roll. Who cares about the Olympics or Golden Jubilee, 2013 and another AC/DC tour is the only countdown we care about!

Don’t mess with Mr Nice Guy
Inaugural Australian Idol winner Guy Sebastian has for a long time been the clean cut, take him home to meet your mother, face of the Australian music industry.

In circumstances similar to when Ned Flanders blew his top on The Simpsons, there is apparently only so far you can push a guy around. After being constantly texted and prank called by a person who got hold of his phone number, Sebastian took to his twitter account posting the joker’s number online. He then encouraged his 40,000 followers to give the prankster a taste of their own medicine.

A few hours later he tweeted a retraction saying he regretted the move but the anonymous person had been abusing his wife and he’d had enough. Funnily enough, the number has since been disconnected.

Looks like the days of innocent prank calls could be over. Our alter ego ‘Amanda Hugankiss’ may have to be laid to rest.

Australian Times brings the Cat back
The Cat Empire are turning 10 this year and to celebrate, Australian Timesis bringing our favourite Aussie hip-hop reggae jazz band to London! Woohoo!

They’re playing Shepherd’s Bush Empire on 20 October and Brixton Academy the night after before rocking out eight other gigs around the UK and then gallivanting off around Europe. If you’re a fan of Felix, Harry and the boys you will be as excited as us. If you don’t know their music (seriously?), head here to check them out.